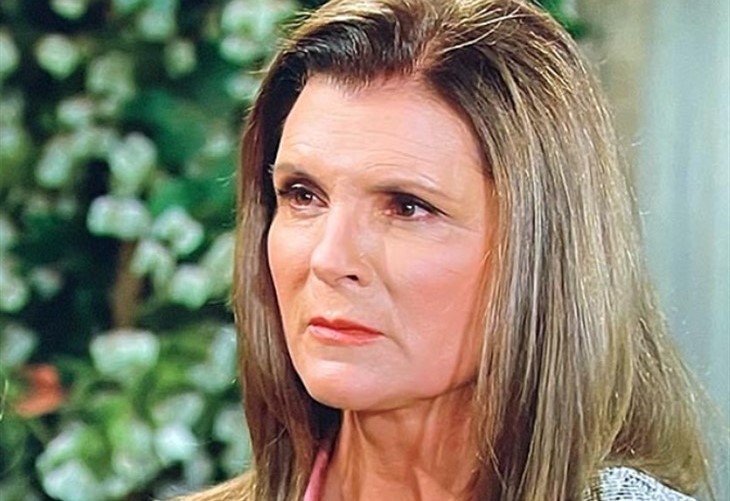 The Bold and the Beautiful (B&B) spoilers reveal Sheila realizing she is going to have to care for Finn on her own now, so she calls her forever helper.

The Bold And The Beautiful Spoilers – What Will Sheila Carter Do Now?

After chasing Li Finnegan (Naomi Matsuda) to what seems like a watery grave, Sheila Carter (Kimberlin Brown) now has to figure out how to help John ‘Finn’ Finnegan (Tanner Novlan) without much medical assistance. She was the one insisting to Li that she take Finn to a hospital where he can get the care he needs and she even made sense, but she is not about to make sense and do that now that she could be accused of killing Li. She is in enough trouble as it is.

That’s when Sheila once again calls Mike Guthrie (Ken Hanes), her trusty helper who has been by her side for years and who made sure she was able to escape from jail. He is shocked by what he sees when she summons him to Li’s hotel suite.

It’s not like Mike is a man who abides by the law. He has been helping Sheila, a notorious law breaker, for years. But to hear that she shot and thought she killed her own son is stunning. Sheila insists it was an accident and Mike wants to believe her but he is not so sure. She seems sincere, but he also knows how much she embellishes the truth to constantly absolve herself of all guilt.

Still, Mike truly believes Sheila wants to help Finn now, so he will be the one to do what she needs.

“Mike believes she loves her son,” actor Ken Hanes said in the July 5, 2022, issue of Soap Opera Digest. “She did not want this to happen and he sees that she’s desperate for him…Mike will do whatever he can to assist her. It is going to be fun to see just how far Mike will go to help Sheila in her time of need.”

If Li was able to somehow bring a braindead man back to life in a hotel suite, surely Nurse Sheila Carter will be able to nurse him back to health. Chances are he will be so forever grateful to her that when he does want to return to Steffy Forrester (Jacqueline MacInnes Wood), it won’t be as easy as people think. Stay tuned to The Bold and the Beautiful weekdays to see how this story plays out.

Days Of Our Lives Spoilers: Chanel And Theo Have A Heart To Heart- Helps Decide Romantic Future