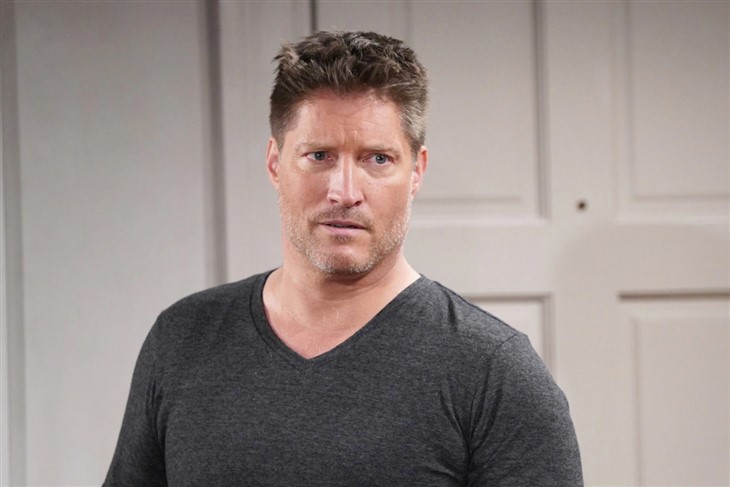 The Bold and The Beautiful spoilers and updates tease Deacon Sharpe (Sean Kanan) will get an unexpected request, and it’ll be a shocker! Steffy Forrester Finnegan (Jacqueline Macinnes Wood) and John “Finn” Finnegan (Tanner Novlan) want him to call if he is contacted by Sheila Carter (Kimberlin Brown) who they believe is alive.

The Bold And The Beautiful Spoilers – Deacon Sharpe Panics

Deacon already knows all too well that Sheila is alive and faked her death by a bear attack; she’s been living with him the last several months. They have been arguing about her “field trips” in various disguises, going for walks, and lurking around the cliff house to spy on Finn and Hayes Finnegan (Iliana and Vienna Norris). Deacon even threatened to turn her into the police himself if she didn’t behave herself and lie low; that turned into a huge and hateful argument.

It was all Deacon could do to fake shock and apprehension when Finn and Steffy came to Il Giardino and stated their case. Finn had been given Sheila’s severed toe by Detective Alex Sanchez (Jeremy Valdez) and decided to do a little detective work on it himself.

B & B Spoilers – The Toe Was Severed With A Knife

Finn explained he had been given the toe as Sheila’s only known relative who could be found, as a courtesy since the case was closed. If he wanted to bury it, have a funeral, flush it down the toilet, it didn’t matter, but nothing else had been found other than a few bloodied clothes.

What the forensics department and the medical examiner failed to realize was that the toe, partially decomposed, was cleanly cut, severed as with a knife. An animal such as a bear makes a tearing motion with its teeth, and the toe was not left by an animal attack. Finn believes that Sheila would not have been beyond cutting off her own toe in order to fake her death and would have known how to stop the hemorrhaging of blood.

The Bold And The Beautiful Spoilers – Would Any Siblings Hide Her?

Finn also learned he has some siblings out there, although they haven’t been heard of for years. Steffy remembered Mary Warwick (Courtnee Draper), who also went by Erica Lovejoy and her other daughter Diana Carter (Weston and Mason Bodle) also her half-aunt. There may be a couple of others she heard were in Genoa City, Wisconsin at one point; Deacon remembers them but doesn’t think any of them would hide Sheila.

Deacon tries to stay calm as he tells Steffy and Finn that Sheila had told him none of her other children wanted anything to do with her. That is why she had come to Los Angeles and focused so heavily on him and Hayes; to himself, Deacon wonders how he’s going to tell Sheila she has to flee.