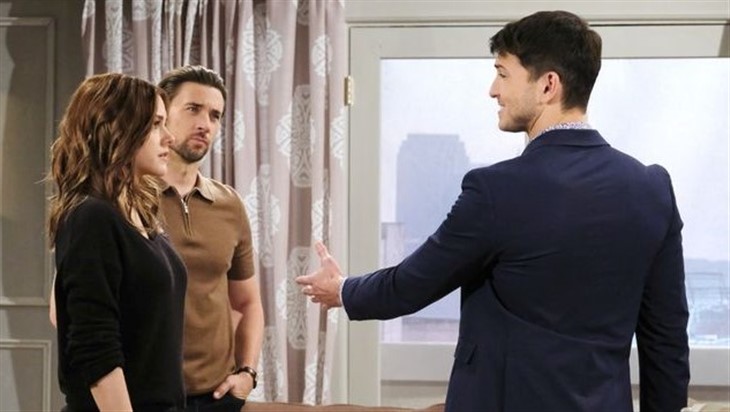 Days of Our Lives spoilers and updates tease that Alex Kiriakis (Robert Scott Wilson) will be livid. He’ll catch Chad DiMera (Billy Flynn) and Stephanie Johnson (Abigail Klein) in another clinch and his jealousy will go into overdrive!

It’s actually difficult to picture out-there former player Alex as being insecure; however, he does seem very insecure in his brand new relationship with Stephanie. It was lust at first sight the first time he ran into her-literally-although he considers it love at first sight. He was knocked off his feet-again, literally, and she was taken aback, not wanting to even know who he was, let alone to date him.

Days of Our Lives spoilers say Stephanie had to learn to guard her heart the hard way, after being very hurt and romantically disappointed. As for Alex, he couldn’t believe it when she finally consented to a real date with him-after he went out on a limb to help her with something.

As for Chad and Stephanie, they are certainly close and they do enjoy being with each other. Stephanie is Abigail DiMera’s (Marci Miller) cousin and so she and Chad are kind of “kissin’ cousins” although not blood related. She certainly has a way with Chad’s young children, perhaps reminding them of Mommy in certain ways, and Chad appreciated her help with them recently.

They all get along very well, but Chad’s not being honest with himself about how he feels about her-thinking it’s way too soon to date again. Maybe that’s what Alex picks up on when he walks in on them in a clinch – again – but Stephanie does care about Chad, and she loves the little ones.

Days Of Our Lives Spoilers – Not What You Think

Alex’s jealousy goes through the roof and his temper with it and he loses it-and very nearly loses Stephanie in the process, because he’s making unfair assumptions. He’s all “get your hands off my woman” livid and finds out Stephanie has a temper of her own as she jumps down his throat. She quickly explains it’s not what Alex thinks, and the situation is very upsetting for Chad and her as they’ve found out Paulina Price (Jackée Harry) has been arrested.

Alex calms down and is immediately ashamed and embarrassed at his faux pas, and turns from opponent to teammate, wanting to know what he can do to help. Stephanie and Chad aren’t sure if there is anything they can do to help Paulina now, no matter how much they all realize she and Chanel Dupree (Raven Bowens) need it.