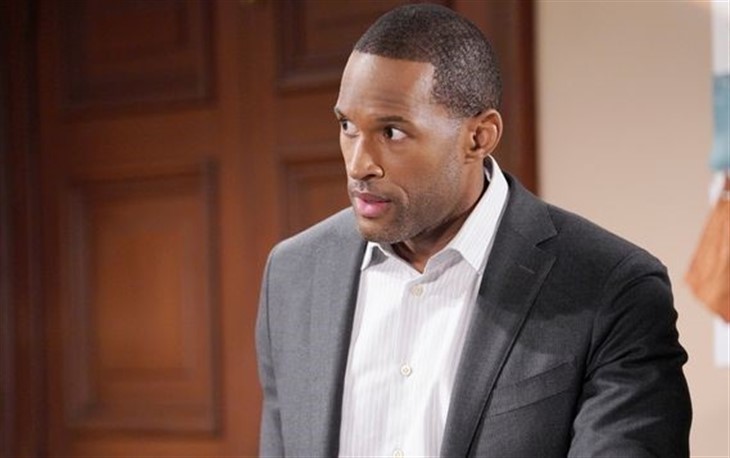 The Bold and The Beautiful spoilers and updates tease that Carter Walton (Lawrence Saint-Victor) is headed for devastation and his marriage hopes dashed. Something looks to happen to Quinn Forrester (Rena Sofer) before they can get married, and it may be fatal!

The Bold And The Beautiful Spoilers – No Exit Story Prewritten

Rena just kind of left the show with no exit story prewritten, and her exit will have to be off screen. Nothing has been publicized about a recast, although there is buzz about her friend Shauna Fulton (Denise Richards) making an appearance soon. Fans would hate to think that she comes from Las Vegas in person to tell Carter that Quinn met a fatal end, but it would be dramatic.

Fall previews in Soap Opera Digest tease Carter’s life will be turned upside down in a minute, and that bodes death for Quinn and certainly death for any life together. It won’t be likely that Carter can ever make up with either Zoe Buckingham (Kiara Barnes) or Paris Buckingham (Diamond White) in the future so he’s back to single and lonely.

B & B Spoilers – What Could Happen To Quinn Forrester?

Denise Richards teased on her Instagram stories that she’d been back for an appearance, which has already been filmed but the airdate hasn’t been announced. Since that indicates Shauna only makes a short visit and Rena’s already left the show, Shauna may return to Los Angeles by herself.

Shauna’s daughter, Flo Logan (Katrina Bowden) hasn’t been seen for a while either, although she’s mentioned as still being with Wyatt Spencer (Darin Brooks) who’s made a couple of recent appearances. It makes the most sense that a scenario where Quinn may have been on her way to Las Vegas for a visit with Shauna, but didn’t make it there. It would make sense for Shauna to come to Los Angeles for a short visit to let her son Wyatt and Carter know Quinn had a fatal accident in person.

Considering there is no recast for the character a sudden death makes more sense, and not being able to say goodbye provides a lot of drama, albeit a bit morbid. Carter will be left to pick up the pieces of his life alone, although Ridge Forrester (Thorsten Kaye) will no doubt support his good friend. Ridge would be the perfect person even though Taylor Hayes (Krista Allen) came back alive after being presumed dead for many years.

As for Wyatt, his father and brother will console him and maybe he and Carter will bond over the tragedy. After a few months of grieving for Quinn, Carter may yet have another chance at love.