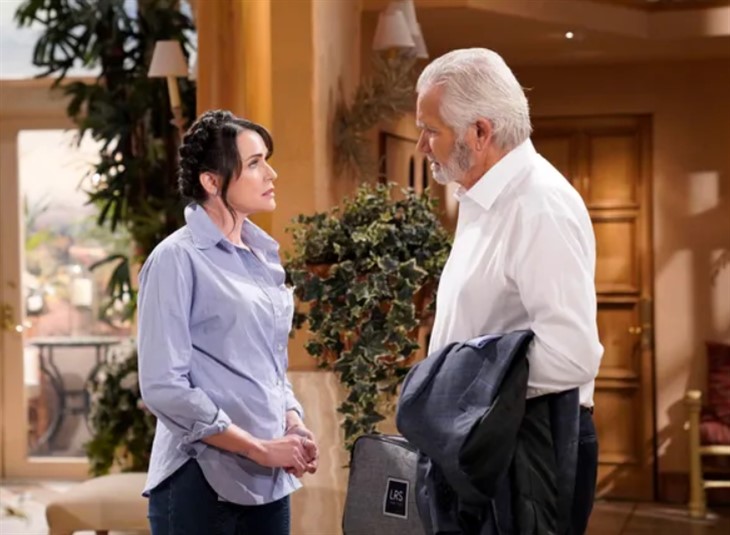 The Bold and the Beautiful (B&B) spoilers reveal Donna’s joy as Eric has chosen to be with her and only her once again, but does she have Quinn Fuller to worry about.

I looks like Donna Logan (Jennifer Gareis) got the happy ending she’s been looking for now that Quinn Fuller (Rena Sofer) caught her in the act with Eric Forrester (John McCook) and said, screw it, she’s going for the man she really loves, Carter Walton (Lawrence Saint-Victor). That means Donna wins by default, but she doesn’t seem to care.

She’s also slightly concerned Quinn might decide to enact some sort of revenge as that’s been her MO in the past. However, she seems pretty happy to be free of her marriage to Eric, which gives her the opportunity to finally be with Carter. However, Eric now plans a big barbecue in her honor. Does that mean she’s getting her own portrait? Maybe Carter can finally get the one of Quinn.

Of course, Donna remembers when Quinn had threatened her nearly a decade ago way back in 2013, which puts a few fears in Donna’s mind here in 2022. Quinn wasn’t too happy with her last year either, which is how she lost her job at Forrester Creations.

“Back then, Donna was obviously not a kid, but in some ways, she was a kid,” Jennifer Gareis said in the July 12, 2022, issue of Soap Opera Digest. She is not the same woman then as she is now and maybe someone could have frightened her. But I do believe with Eric having her back, Donna feels Eric’s arms protecting her and she is not going to be afraid of anything or anyone to find her true happiness.”

This means that there likely won’t be a catfight between Donna and Quinn. After all, Quinn has matured as well and it was evident in the calm and reasonable way that she and Eric ended things. And she has Carter now. While she might feel hurt and foolish because she was lied to when she did her best to remain faithful, she has Carter now so Donna doesn’t seem to have to worry about a thing. Maybe there can even be a double wedding. Stay tuned to The Bold and the Beautiful weekdays to see how this story plays out.