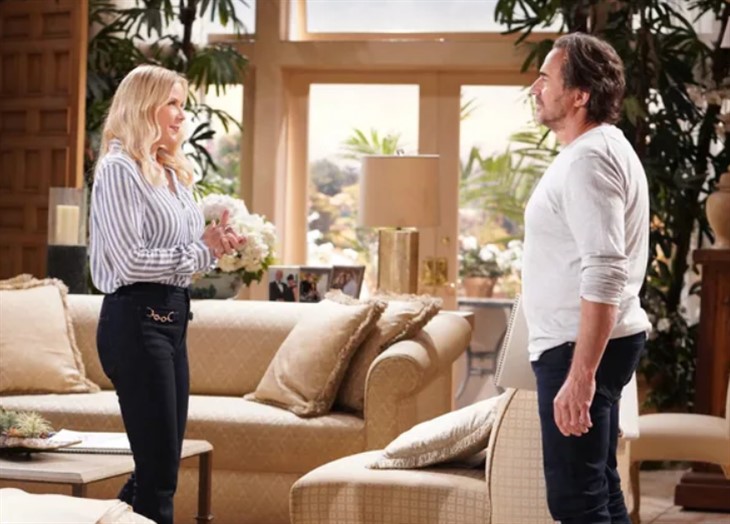 The Bold and The Beautiful (B&B) spoilers and rumors tease Brooke Forrester (Katherine Kelly Lang) finds out Ridge Forrester (Thorsten Kaye) is running off to Europe with Taylor Hayes (Krista Allen)! She won’t take kindly to it, even if they are looking for Steffy Forrester Finnegan (Jacqueline Macinnes Wood) in future BOLD episodes!

Brooke has the idea that she should be along on this trip as Taylor and Ridge look for the daughter that they had together, not that he and Brooke had together! Brooke was with Ridge about as much time as she was with a series of other men, and that is why Steffy and Thomas Forrester (Matthew Atkinson) want him with Taylor. There is nothing romantic or anything resembling destiny at all there – she goes from man to man and then circles back to Ridge and he is hurt over and over!

But Brooke insists that she is Ridge’s wife and she needs to help search for Steffy, her stepdaughter, along with Ridge and Taylor. What Brooke really wants is to keep a short leash on Ridge, lest Taylor try to get into his pants and succeed!

Steffy and Thomas had both warned their father about how possessive and controlling Brooke can be; even when she is with a man she’ll tire of him. When she first came into the Forresters’ lives she ran after Ridge when he was engaged to someone else, a server with a caterer who they hired for his engagement party. When she couldn’t snag Ridge she ran after Eric Forrester (John McCook) and broke up his marriage and married him – but she moved on to Ridge when she found an opening! It is because she is possessive and controlling that she insists on coming to “support Ridge” as he and Taylor search for Steffy and the kids! For Ridge’s part, he wants her to stay home under guard in the Forrester mansion, where he doesn’t have to worry about Sheila Carter (Kimberlin Brown) coming after her too!

As expected Brooke does not take kindly to Ridge’s order that she stay back home where it’s safe – true, Sheila could be anywhere; she could even be in Europe! That, of course, is Ridge’s point – it will be difficult enough to keep Taylor safe, but both Taylor and Brooke would make it difficult to watch for Sheila! That is why they want to look for Steffy, because they have not been able to reach her by phone!

Brooke thinks there is strength in numbers; Ridge reminds her Steffy and John “Finn” Finnegan (Tanner Novlan) were both there when Sheila shot them!  Two against one wasn’t such great odds that night and three against one wouldn’t have been any better!

Insecure and distrustful of her husband and the mother of his two oldest children is not a good look for Brooke! It makes her appear weak and dependent instead of strong and independent! Many times when people don’t trust others is because they don’t trust themselves, and that could certainly be said of Brooke many times over the years. She has often accused others of actions she herself has taken in the past, and perhaps that is the reason why. Brooke complains, but finally has to give in to Ridge when he puts his foot down and won’t allow her to endanger herself by insisting on being where she’s no needed! Be sure to catch up on everything happening with BOLD right now. Come back here often for The Bold and The Beautiful spoilers, news, and updates.