B&B Spoilers: What Does Sheila Do Next? – Finn Remains In Danger 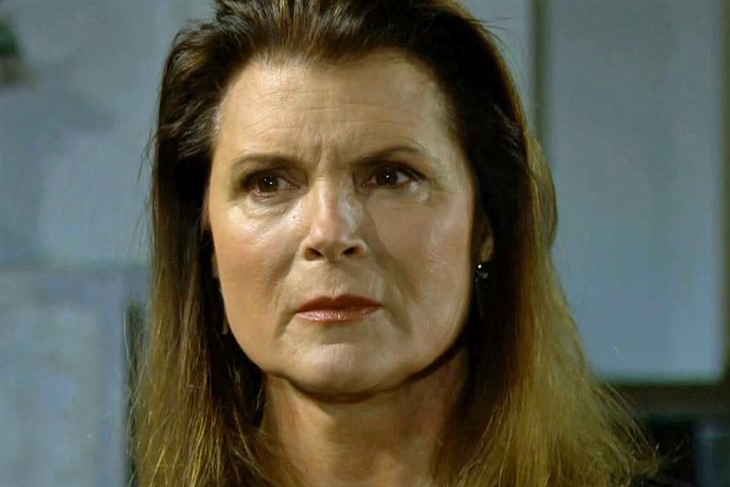 The Bold and the Beautiful (B&B) spoilers document Sheila Carter (Kimberlin Brown) may have repeated an assumption mistake. She assumed that Steffy Forrester (Jacqueline MacInnes Wood) was dead after the second shot in the alley behind Il Giordino.

After viewers saw Li Finnegan’s (Naomi Matsuda) sports utility vehicle crash into a body of water while ablaze, Sheila appears to believe that her latest rival is dead. But fans of great soap know not to make any assumptions.

Is there any doubt about the lengths Li is willing to go to after preserving her son’s life on that night Sheila believed she inadvertently shot him dead? If so, then there should not be.

Li was not shown upon impact. Her body was not seen floating in the water. There has been no word of the police finding Finn’s adoptive mother after the crash, though Deputy Chief Bradley Baker (Dan Martin) may have put his entire force on Sheila’s trail. Yes, that is a wink toward the latest unfathomable escape Brown’s character pulled off.

Fans would be right to assume that Li is not dead. Hopefully, evidence of that assumed reality is provided shortly.

B&B Spoilers – John Finn Finnegan Is Coming Out Of It

John Finn Finnegan (Tanner Novlan) has no idea what happened to him since the shooting. As devoted fans recall, he was contacted by his wife, who was about to confront Sheila at Il Giardino.

Novlan’s character rushed to the outdoor restaurant, somehow found his wife in the alley confronting Sheila, and stepped into that first bullet that was intended for Steffy.

Thankfully, Finn awakened while Li and Sheila were jointly at this bedside. At least there was that moment of hope among all the intense drama.

The Bold And The Beautiful Spoilers – Sheila Carter Sticking Around

Sheila seemed destined for federal prison. That meant viewers would likely see her in a handful of visitor room scenes, possibly witness Brown’s return to the cast at a future trial, and then potentially see B&B’s greatest villain again in a few years.

But the prison break that Mike Guthrie (Ken Hanes) arranged could enable a summer full of Sheila scenes, with Steffy’s return imminent. Wood was on the set with the cast of B&B in Monte Carlo, which implied that Steffy was back in the script.

How Steffy and Finn reunite, and Sheila keeps Finn alive until the highly anticipated reveal is another reason why the audience will keep watching.