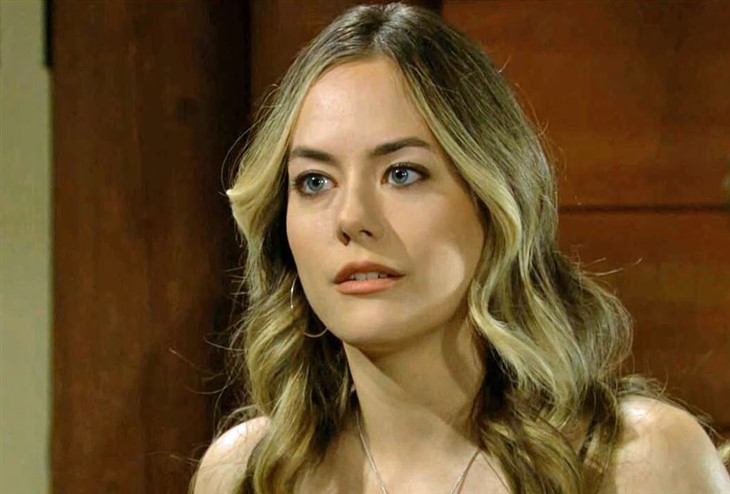 The Bold and the Beautiful (B&B) spoilers tease that right about now Hope Logan (Annika Noelle) is having to pick her jaw up off the floor along with the other two or three wedding guests who actually agreed to attend Paris Buckingham (Diamond White) and Carter Walton’s (Victor Saint Lawrence) quickie wedding.

Of course, this being a soap wedding, it did not go off without a hitch, in fact it literally went off without a hitch! TBH while all of the Quarter drama has been going on, our CBS insider has been hearing about a couple of other characters, ones fans haven’t seen much of lately. What is the skinny on that?

Apparently there is dish that Annika might like to see her character test the waters with Zende Forrester (Delon deMetz) or Wyatt Spencer (Darin Brooks). Why not, she and Liam have been on the merry go round for forever, and fans can’t be expected to watch the same old paint dry day after day. Our insider is hearing chit chat about this scenario and while nothing has been decided, it’s hard not to speculate on the situation.

Zende was out of the dating pool once Paris dumped him for Carter. Sure, he has flirted with Forrester models, but he was ready to MARRY Paris. Similarly, Hope is a forever type of gal, something that Liam seems incapable of, ricocheting off of her and her half sister Steffy Forrester (Jacqueline MacInnes Wood) for eons now.

It seems like Hope would have no problem settling down with a rich, well-mannered professional who only has eyes for her. Clearly after Paris dumped him, he wouldn’t go back to that train wreak, would he?

The Bold And The Beautiful Spoilers – Will Wyatt Spencer And Hope Logan Tango?

Then again, Wyatt and Hope would be an equally delightful option. They both have fun senses of humor and understand the ins and outs of dealing with powerful families and the drama that can come with them. For what it’s worth our CBS inside source thinks there could be a romance shakeup, tell us what you think, who do you want to see Hope with?