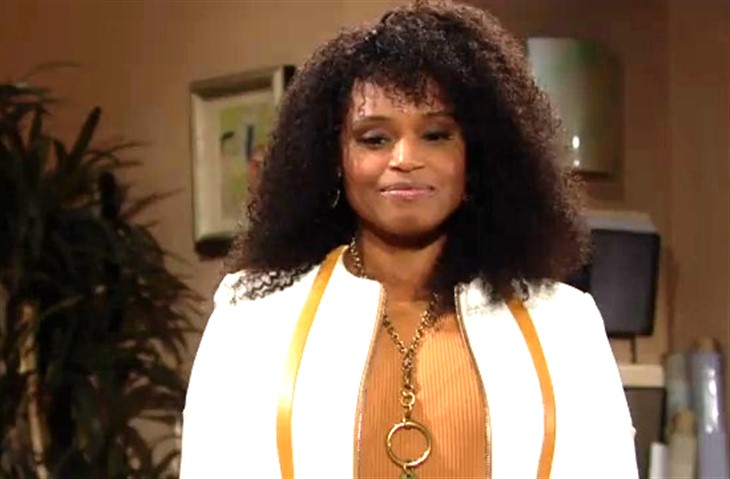 The Bold and the Beautiful spoilers reveal that Dr. Grace Buckingham (Cassandra Creech) is determined to control Paris Buckingham’s (Diamond White) life. During an interview, Lawrence Saint-Victor explained how Grace sees Carter Walton. The actor said to Grace, Carter is a backstabbing, immoral dog. Keep reading to find out what else the actor said.

B&B spoilers reveal that Grace won’t let her grown daughter live her own life. Grace is convinced that Paris is making a huge mistake. Not only is Grace trying to push Zende Forrester (Delon de Metz) and Paris together, she threatened and blackmailed Carter. Even though Grace thinks she knows what is best, Paris is an adult and should be able to make her own decisions.

After Grace threatened and blackmailed Carter, the COO decided to push Paris away. However, he didn’t explain the real reason why he didn’t want to move forward with their relationship. Instead, he told a half-truth about how the Forrester family would react.

Carter said that it could derail Paris’ career. Carter also claimed that the Forrester family would view their relationship as Carter betraying another member of the family. So, Paris has been left completely confused and doesn’t know the truth.

The Bold And The Beautiful Spoiler – Lawrence Saint-Victor Explains

The Bold and the Beautiful spoilers reveal that Saint-Victor spoke to Soap Opera Digest about the storyline. The actor mainly explained Grace’s perspective and why the doctor is trying so hard to protect Paris from Carter.

“She sees Carter as a dog. She sees Carter as someone who will go behind his friend’s back, like he did with Eric [Forrester, John McCook] and now Zende. She thinks he has no morals, so already there is strong opposition between the two of them. Right now, they are at odds – and she’s not completely wrong… what Grace says about him is not completely true, but there is some truth that he needs to deal with.”

Even though Grace is taking extremes to control her daughter’s love life, could it backfire on her? When Paris finds out her mother blackmailed and threatened Carter, she will be furious. Plus, if Grace makes good on her threats, it might completely destroy Paris’ career. How will Grace deal with being responsible for ruining Paris’ life?

What do you think of Grace Buckingham since her arrival? Do you believe she’s only trying to protect her daughter? Or should Grace butt out and focus on her own life? Share your thoughts about this storyline and remember to keep watching the CBS soap to see what happens next.