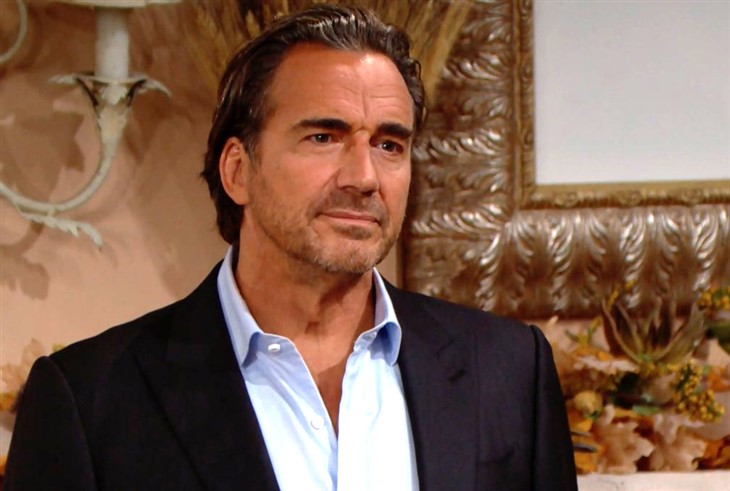 Ridge will reject Taylor’s words out of hand. His instant reaction will be harsh, which represents the worm of fear that has been gnawing at his gut.

Brooke has been behaving very strangely. Her break from sobriety is something she says is unexplainable.

The inability to understand why she chose to drink alcohol and become very drunk on New Year’s Eve has served to crush her self-confidence. Ridge has been fully supportive, which included accompanying her to an Alcoholics Anonymous meeting.

Ridge heard his wife say that she was drinking alone on that film noir-like night. Brooke had to reinforce that false claim in front of him and the alcoholics at the meeting. Doing otherwise would have meant providing the name of her drinking buddy.

Deacon forgot his smartphone in Brooke’s living room and returned later to get it. That was a debatable moment that Brooke was unprepared to challenge when Deacon came back to the mansion after Hope Spencer (Annika Noelle) and her family left.

Kanan’s allowed himself to get carried away. He decided to drink shots with Brooke rather than act responsibly. He knew she was drunk, and instead of getting her water or the cliched pot of coffee, Deacon selfishly played along.

Brooke is right to think that Deacon has not matured. She knows that he cares about her. But facilitating more alcohol consumption in those circumstances was reckless personified, with the results sealing both people’s fates and the flow of that intel to Taylor via the pulled surveillance footage.

The Bold And The Beautiful Spoilers – Ridge Forrester Knows, Now What?

This reveal has been inevitable. The lingering question involves how Ridge will handle what happens next.

Ridge is teased to be pressured by Taylor, Steffy Forrester Finnegan (Jacqueline MacInnes Wood), and Thomas Forrester (Matthew Atkinson) to break from Brooke. Eric Forrester (John McCook) will advise forgiveness, as was his most recent choice with Quinn Fuller (Rena Sofer).

Ridge will divorce Brooke if general history repeats. Taylor’s return to the show seems intended for this moment. But soap opera storylines should never be predictable, with skillful twists keeping a loyal audience engaged.

Y&R Spoilers: Amanda’s Search, Only One Man Can Save Dominic