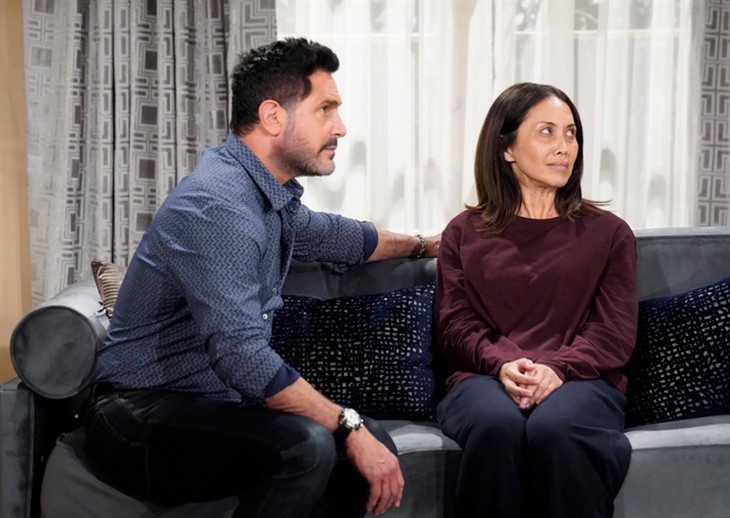 The Bold and the Beautiful spoilers document that Bill Spencer (Don Diamont) is growing closer to Li Finnegan (Naomi Matsuda). While their introduction was classic soap, that plot push enables a natural connection to form.

Li feels indebted to Bill, who found her behind a restaurant on the wharf. She was apparently living there since saving herself from seeming death.

Bill’s find of Li was followed by him bee-lining to the location where she cared for John Finn Finnegan (Tanner Novlan). He jetted Finn to Monaco, which allowed Li’s son to reunite with his beloved wife.

The Bold And The Beautiful Spoilers – Steffy Forrester Finnegan Connection

Bill has a long history with Li. She is one of the women he feels closest to in the world.

Diamont’s character is a ladies’ man. That is why Katie Logan (Heather Tom) has refused to pursue another reunion with him. While Bill does claim to want Katie back and has patiently waited for her, he openly admits that his personality remains the same.

Steffy Forrester Finnegan (Jacqueline MacInnes Wood) is part of Bill’s checkered romantic past, with their one-night cavort in the Forrester mansion’s guest house being legendary. Li seems likely to learn of that eventually.

Jack Finnegan (Ted King) cooked his own goose. He lied to Li decades ago about Finn’s identity, telling his wife that he was the baby of a woman who could not raise him.

Sheila Carter (Kimberlin Brown) was incapable of being a mother to Finn at that time in her life and to any of her other children, at any times in their lives. But Jack’s refusal to tell Li that he had an affair with Sheila, who was a nurse at the hospital where Matsuda’s character was serving as a doctor, and he was Finn’s biological father, set the clock ticking.

Li was stunned to learn the truth in the recent past, with that flashpoint forcing the marital separation. Jack has rarely been spoken of or seen since.

Finn said he wanted his father to know he was alive, which implied that Jack would be written back to the story line at some undetermined point.

The Bold And The Beautiful Spoilers – Li Finnegan Seeks Kindness

Li was wronged by Jack, as was Finn. Bill rescued Li and ensured Finn and Steffy would be reunited as quickly as possible.

It is natural for Li to see Bill as her hero and as an anti-Jack presence. B&B fans realize the rub, with Li and Bill projecting to natural friends and possibly, relationship status in the near future.