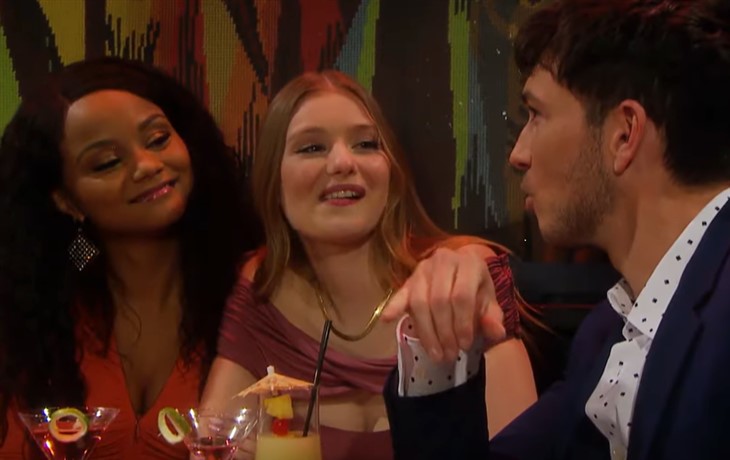 Days of Our Lives spoilers say that Alex Kiriakis sure is a troublemaker. And by that, we mean he’s trying to seduce a whole lot of women in this fictional town of Salem. Apparently, he’s also tempting Chanel and Allie to go somewhere that they probably haven’t gone before in their sexual fluidity. Here’s what you need to know.

Days Of Our Lives Spoilers – Is Alex Really Tempting Chanel And Allie To Push Their Boundaries?

According to the latest DOOL spoilers, Alex goes on a throuple date with Chanel and Alie. Apparently, he has some very specific ideas as to what he would like to see happen on that date, too!

Of course, many Days of Our Lives fans have weighed in on the matter on social media. Some comments have included, “Noooo way after all Allie and Chanel went through to be together are they entertaining Alex or any other man or woman right now. I’m not saying it may not happen down the road. But that Uhaul joke about lesbians is valid in most cases. When they start a new relationship they start nesting and committing to a monogamous relationship with one another for life. Most gay men’s relationships are very different. But Ron doesn’t do those well either so I guess I shouldn’t expect any better for Allie and Chanel,” along with, “Where exactly is the sexual boundary pushing? Both women have been with men before. If Alex were going to be with a man and a woman or two men or even one man (presumably he hasn’t before), THAT would be a pushing of boundaries.”

DOOL Spoilers – What’s Next For Chanel Pince And Allie Horton ?

Another fan wrote, “Lesbian or sexually fluid, are there a lot of young women in their early twenties today who want to start “nesting” right at the beginning of a new relationship? Ironically, that’s exactly what happened to Will and Sonny practically the moment they met (they weren’t even married yet) and it was dreadful. They were acting like 2 60 year olds while still in their twenties. Maybe that’s the only way they can be “safe” for a straight audience. I really think in 2022 they still don’t write gay characters as real people… even when the writers are gay. I haven’t checked out Uncoupled yet or the QAF reboot. Are they any good?”

Of course, fans will have to tune in to find out what will happen next! In the meantime, let us know what you think by leaving us a line with your thoughts in our comments section below. Days of Our Lives airs weekdays on the NBC network. Check your local listings for times.

General Hospital Spoilers: Is Jordan Helping Portia Or Setting Her Up?