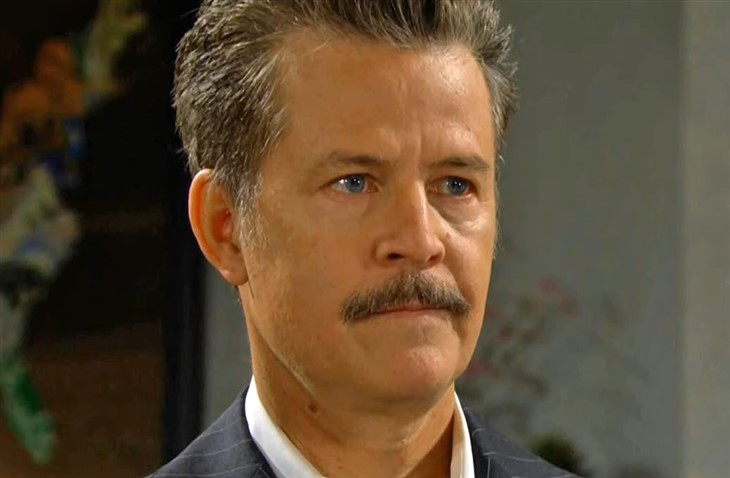 The Bold and the Beautiful (B&B) spoilers for Thursday, July 7, 2022, reveal Jack back when he really should have been back months ago.

The Bold And The Beautiful Spoilers – Jack Finnegan Has Questions

Yes, his family ostracized him after the truth came out that he had an affair with Sheila Carter (Kimberlin Brown) and he was really John ‘Finn’ Finnegan’s (Tanner Novlan) biological dad and adoptive dad, but it still doesn’t make sense that Jack Finnegan (Ted King) stayed away for months after he got news of Finn’s alleged death.

Well, now he is back and he is looking for his wife and Li Finnegan (Naomi Matsuda) is nowhere to be found. Jack just wants to know where his son is buried, which has been a question on everyone’s mind, but not so much that they are giving it too much thought. Even Steffy Forrester (Jacqueline MacInnes Wood) doesn’t seem too concerned about Finn or his ashes and he was her husband.

The first two people Jack turns to are Taylor Hayes (Krista Allen) and Ridge Forrester (Thorsten Kaye) as he hopes they have news about Li’s whereabouts. They have no clue, but they fill him in about everything Sheila and he is horrified. In fact, none of them even know the half of it as Sheila now has to struggle with a conscious Finn.

Now that Finn is awake, his brain is also working just fine despite Li being told there was no brain activity. In fact, his memories of that fateful night behind Il Giordino come flooding back and he wants to get away from his crazy bio mom ASAP. The problem is, that he is still not well and cannot get out of that bed.

Even if Finn could move, does anyone really think Sheila would allow him to go far? No, of course not. According to Sheila, she is the one who saved Finn’s life and now it is her job to keep her baby boy with her no matter how far he wants to run. Will Li turn up alive? Will Jack figure things out? Or is Finn doomed to be with this crazy woman indefinitely? Maybe Steffy will have a cosmic feeling she has to find her man because he is not dead. Stay tuned to The Bold and the Beautiful weekdays to see how these stories play out.