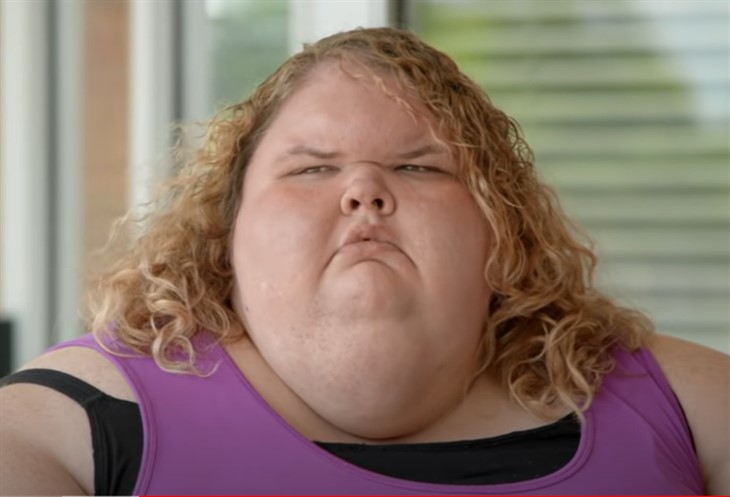 1000-Lb Sisters spoilers hint that Tammy Slaton will keep her fans guessing about two aspects of her life. First, the reality TV star will repeatedly appear on and then disappear from social media. And second, Tammy will continue to make her followers worry about her ongoing weight loss struggles.

Find out the 1000-Lb Sisters star’s most recent reappearance on social media. And see why fans feel so worried about Tammy’s weight. Get the latest news about Tammy Slaton below.

And she’s back! 1000-Lb Sisters star Tammy Slaton has worried fans since disappearing from social media in late March. But surprise! The reality TV star just resurfaced. And fans on Reddit caught her comeback.

Tammy’s most recent appearance on social media resulted from a fan’s post. “Wonder how Tammy is so far?” wrote the 1000-Lb Sisters follower. And she got more of a direct response than she probably anticipated!

Appearing in the comments section, Tammy wrote, “Tammy [is] doing just fine.” Although fans pondered the fact that Slaton often refers to herself in the third person, they appreciated her humor. But the 1000-Lb Sisters star also seems determined to deny all those rumors that she continues to struggle with her health.

“Tammy is getting worse,” claimed one follower about the 1000-Lb Sisters star’s weight. And another pointed out the contrast between the 35-year-old and her younger sister, Amy Slaton, 34. “Amy looks amazing!” gushed another follower. But the enthusiasm for the younger 1000-Lb Sisters star didn’t stop the worries about Tammy’s weight.

Some of Tammy’s fans even called the difference “heartbreaking.” Because the 1000-Lb Sisters star confines her social media posts to selfies rather than confessions, no one seems to really know her health status. For instance, a recent Instagram post from the self-dubbed Queen Tammy showed only her use of filters.

“Not a good filter to use,” pointed out one fan. And another pleaded, “We would really love a life update.” But one follower got blunt. “This looks like Honey Boo Boo in 20 years,” wrote the critic, comparing the 1000-Lb Sisters star to the alum of “Toddlers And Tiaras!”

Tell us what you think. Do you worry that Tammy Slaton has gained weight? And why do you believe that the 1000-Lb Sisters star refuses to give her fans the life updates they want? After you share your views, check back on our site for more reality TV news!

Y&R Spoilers: Ashland And Diane Team Up To Kidnap Harrison?