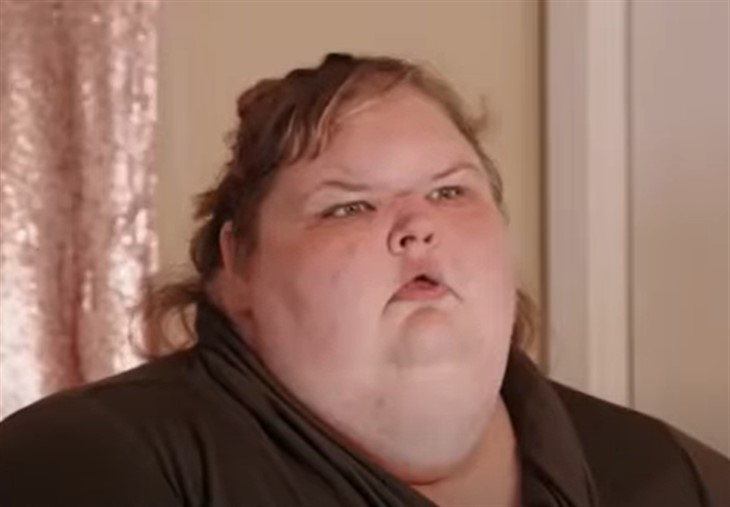 1000-Lb Sisters spoilers have hinted at shocking new health problems for Tammy Slaton. And now her own family seems to believe in the rumors that the 1000-Lb Sisters star could face death. But could Tammy herself disprove those horrifying claims?

Learn the tragic death bombshell that Tammy Slaton’s family just dropped. And see what the 1000-Lb Sisters star herself has revealed below.

Tammy Slaton faces a serious health crisis, predicts her family per the Sun. As a result of her actions, the 1,000-lb Sisters star’s relatives dished up a dire prediction. And they believe that Tammy will die within five years!

But Slaton’s family stopped short of predicting that the reality TV star’s death seems inevitable. Pointing to Tammy’s drinking and smoking, the clan hinted that they hope swapping her unhealthy habits for healthy ones could still result in a turn-around. But there’s a catch-22 in that wish.

Tammy also struggles with her weight. And the 1000-Lb Sisters star has shown that she prefers gobbling pizza to going for carrot sticks. As a result, her family feels that her drinking, smoking, and refusal to diet keep adding fuel to a fire that could end in a too-early death.

Amy Slaton Halterman previously has taken the lead in trying to coach Tammy to improve her health. And Amy seems like the perfect person to motivate her 1000-Lb Sisters co-star. For instance, Amy succeeded in losing enough pounds to qualify for weight loss surgery. And she not only got her dreamed-for baby. Now Amy’s pregnant for a second time!

But rather than Amy, Tammy’s brother Chris Combs spoke out on an episode of 1000-Lb Sisters. Chris expressed his worries about Tammy when she wouldn’t go with him to a doctor’s appointment. And he didn’t hold back in discussing his fears.

“She has enough health problems without adding more to the fire,” stated Combs. But the reality TV star shared his questions about Tammy with the family. As Chris pointed out, the relatives face a serious dilemma.

In Combs’ mind, the family needs to make a choice sooner rather than later. “Do we just let her live and be comfortable, and plan, for her not being here in five years?” he asked. And, he added, should the family “take care of all the arrangements?” Chris found support in their sister Amanda.

Frustrated that Tammy will not get serious about her health, Amanda got blunt. “It sucks to have to sit and have a conversation like that about final arrangements,” stated Amanda. And she put the burden on Tammy, who “has the opportunity to change.”

But Tammy herself has indicated no desire to change, per People. Happy partying with friends, enjoying smoking, drinking, and eating foods not on her diet, the 1000-Lb Sisters star defied her family. “But now I’m to the point where, I don’t care. I’m gonna be me. Whether you like it, he likes it, she like it, we all don’t like it. I don’t care. I want to be me,” she concluded.

Tell us what you think. Do you believe that Tammy Slaton’s family should try to force her to see a doctor? Or should they let her make her own choices? And after you’ve shared your views, check back on our site for more 1000-Lb Sisters news.