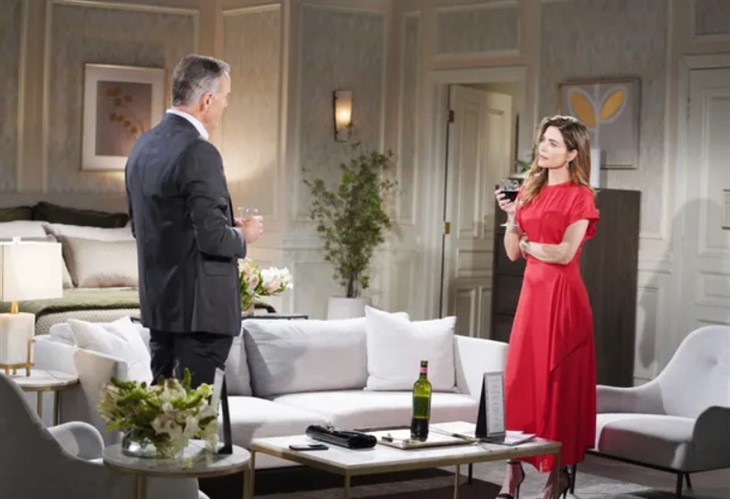 The Young and the Restless (Y&R) spoilers for Tuesday, July 6, 2021, reveal Ashland Locke’s secrets catching up with him

The Young And The Restless Spoilers – Should Victoria Newman Know More?

When Ashland Locke (Richard Burgi) first arrived in Genoa City, Kyle Abbott (Michael Mealor) painted him as the Big Bad who was going to destroy his life and ruin businesses because that’s just who he is — or at least that’s who Tara (Elizabeth Leiner) painted him out to be. Kyle still hasn’t figured out how manipulative Tara is but Victoria (Amelia Heinle) thinks she’s figured out a thing or two about Ashland.

On Tuesday, more people learn what’s really going on with Ashland, but are they new secrets or is it the one Victoria already knows — that Ashland is dying? Could he be fooling her and there’s more to learn? Or, is Victoria the one fooling him? (She certainly didn’t seem to be fooling anyone when the pair got passionate but she also seems as ruthless as her father of late.)

The Young and the Restless spoilers show Amanda (Mishael Morgan) has about had it up to hear with her birth family and the myriad of lies they have told her. She is especially frustrated — and frankly furious — with Naya (Ptosha Storey) and the part she played in her biological father’s death. She doesn’t know whether to wash her hands of Naya or help her and on Tuesday, Amanda confronts her mother once again. What truth bombs might she learn this time?

Chelsea (Melissa Claire Egan) can’t stand living another day in that mental institution and panics when she learns her doctor plans to keep her there for a long, long time. That means she has to scheme and pull a con — and pull Chloe (Elizabeth Hendrickson) into her latest mess.

Will Chloe be there for her friend this time or has she finally learned her lesson that when you help Chelsea, only trouble can follow? Chelsea’s plan once again involves Adam (Mark Grossman), but is she ready to sabotage his life or beg for his help so she can be a free woman? Stay tuned to The Young and the Restless weekdays to see how these stories play out.  Keep checking Soap Opera Spy for more The Young and the Restless spoilers, news, and Y&R updates.