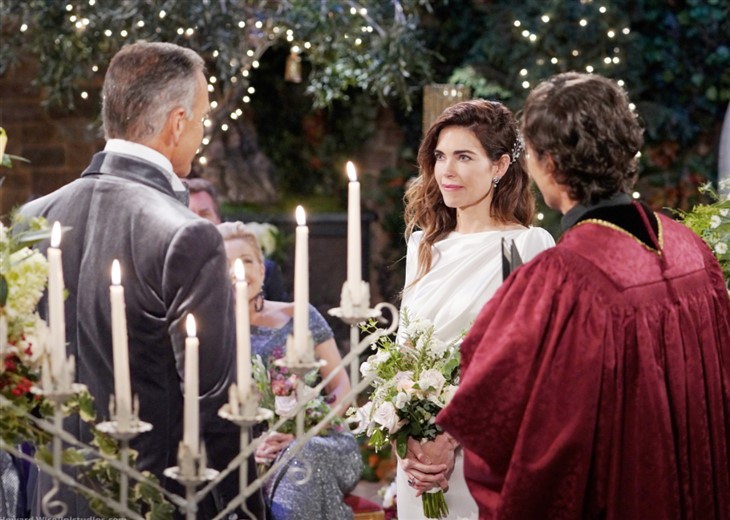 The Young and the Restless (Y&R) spoilers for Monday, October 18, 2021, reveal more drama in Tuscany. Just because Victoria and Ashland married doesn’t mean there’s still no trouble in store.

Victoria (Amelia Heinle) finally got married in Sally Spectra’s (Courtney Hope) dress and is ready to live happily ever after as long as Ashland Locke (Richard Burgi) lives. Who knows? Maybe a miracle will happen and his cancer will go into remission. Wouldn’t that be convenient?

With all this joy, Victoria can’t wait to give a very special gift to Ashland. What could it be? She has already given him her entire life and soul. What more does he need? Well, Victoria thinks he needs something and she is going to give it to him. Little does Victoria know she’s going to need a little help sooner rather than later.

Y&R Spoilers – Did Billy Abbott Cause More Trouble Than He Planned?

Jesse Gaines showed up but not right in the nick of time. He had a video reading of his father’s will and everything but it was Adam Newman (Mark Grossman) that stopped Billy (Jason Thompson) from causing a ruckus. Billy let the wedding happen, but he now knows too much and wants to print it all. Somehow, he has to stop Ashland Locke even if Victoria married him already. As usual, it’s Lily Winters (Christel Khalil) who is there to try to stop him.

Will she have any influence at all? So far, she’s allowed Billy to print countless things he shouldn’t for his own personal reasons. Is this a way to run a media company?

The Young and the Restless Spoilers – What Are Victor Newman And Nick Newman Up To?

Nick Newman (Joshua Morrow) gets into another confrontation with Jesse Gaines, but when The Great Victor Newman (Eric Braeden) walks in, things get a little dicey. Victor wants to know what the heck is going on. Will Jesse or Nick tell Victor the truth? Or will something very dangerous happen behind closed doors? Something fishy is going on here and we suspect Victor has something to do with it. Stay tuned to the Young and the Restless weekdays to see how if anyone actually gets married in Tuscany.