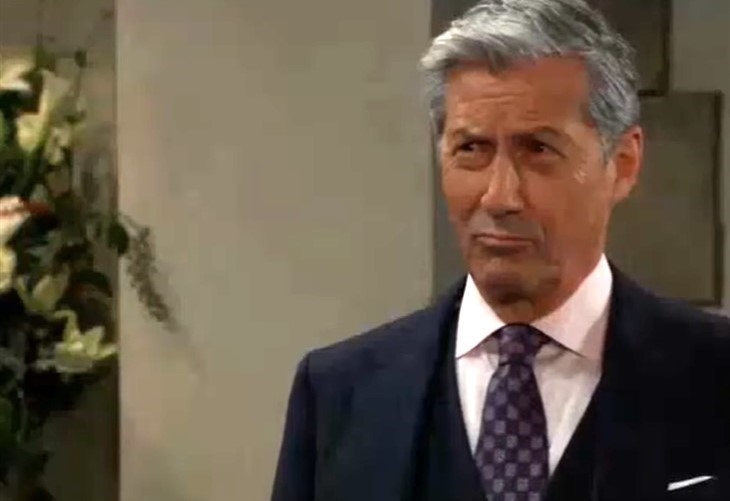 General Hospital (GH) spoilers and updates tease a deal is made and the man who says he is Valentin’s dad will be granted immunity. He will not pay for his many crimes and may begin a new reign of terror.

Sam McCall (Kelly Monaco) and Dante Falconeri (Dominic Zamprogna) will apprehend Victor Cassadine (Charles Shaughnessy and turn him over to the WSB. He will not remain in custody and will return to Port Charles after negotiating his release. Victor is responsible for Drew Cain’s (Cameron Mathison) being tortured and held prisoner. He abducted Nurse Chloe Jennings (Phoebe Kuhlman)and Liesl Obrecht (Kathlene Gati) and Valentin Cassadine (James Patrick Stuart) whom he says is his son.

GH Spoilers – Peter August Gets Thrown Under The Bus

Victor placed the blame on Peter August (Wes Ramsey) for all the crimes and attempted to convince Valentin that he, himself is a victim. While he is in Port Charles, Jason Morgan will be searching for Obrecht and will more than likely find her and bring her home. Liesl will be furious when she finds out that Victor has been granted immunity and exact her own punishment on her former lover. She will also want to make sure Peter is apprehended and brought to justice but Victor has other plans.

At the end of Friday’s episode, two of Victor’s henchmen grabbed Peter and the Monday preview shows him begging for his life. Wes Ramsey’s contract is up in November but it has not been revealed whether or not he is leaving General Hospital. If Peter is eliminated this will be one more person to add to the list of those whose lives Victor has toyed with. It’s possible that Heinrick might take the fall for all the crimes and be locked away for a long time.

Spoilers indicate that Valentin will end up needing medical assistance. Perhaps he might need a blood transfusion, which will tell him whether or not Victor is his dad. Once he is unleashed on Port Charles there is no telling what Victor is capable of or who his next victims will. On Friday Robert Scorpio (Tristen Rogers) said everyone needed to fasten their seatbelt because Cassadine and Faison would bring trouble. With or without Peter, Victor is going to bring a lot of heartache to those he interacts with.