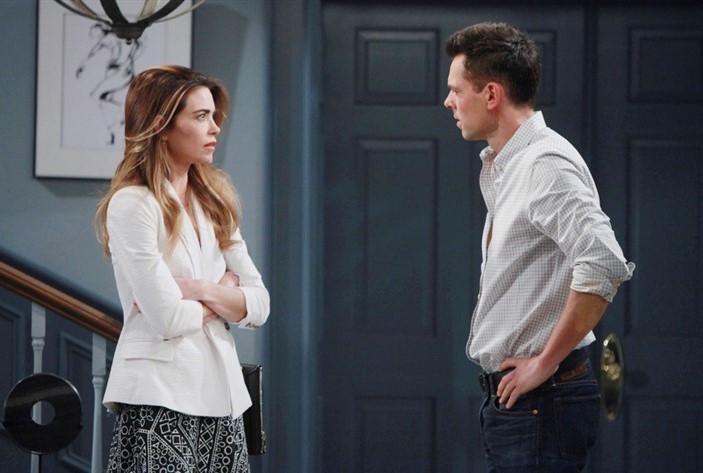 The Young and the Restless spoilers for Tuesday, November 23, 2021, reveal Victoria and Ashland Locke making quite the power play so they can get in on the ChanceCom action.

The Young And The Restless Spoilers – Saviors For Billy Abbott And Lily Winters?

Ashland (Richard Burgi) and Victoria (Amelia Heinle) are well aware that Victor (Eric Braeden) and Adam Newman (Mark Grossman) managed to bring Billy Boy Abbott (Jason Thompson) to his knees and now ChanceCom is in massive trouble. Billy never meant to publish that story on Ashland, but he never should have had it written and ready to go so that Adam and Victor could hack the ChanceCom computers and publish it themselves.

Now, Ashland has every right to sue them and Billy is bracing himself for it after begging Adam not to take the company away from him. It looks like they want a piece of ChanceCom themselves, but they may also have an offer to Billy that he can’t refuse. Do they tell him there’s a chance they can save Billy’s and Lily’s jobs?

Well, when Ashland and Victoria leave, Lily (Christel Khalil) puts out a distress call. Who could help her at this point? Does she need Jill (Jess Walton) for backup to help her son make the right decision?

Devon Hamilton (Bryton James) is still not sure what to do about the baby Abby Newman (Melissa Ordway) essentially left on his doorstep so she could take off for parts unknown. Sure, he is the biological father of this child, but this wasn’t part of the plan and he doesn’t want to get too attached.

However, something might be going wrong or why else would he call Dr. Elena Dawson (Brytni Sarpy) over for help. Does the baby have the sniffles again or might there be something more serious? Is it more important to find Abby sooner rather than later? If something is wrong with Dominic, will this prompt Devon to think Abby is an unfit mother and sue for custody — even after she manages to bring Chance back home? This always seems to have been where this story is heading. Stay tuned to the Young and the Restless weekdays to see how these stories play out.