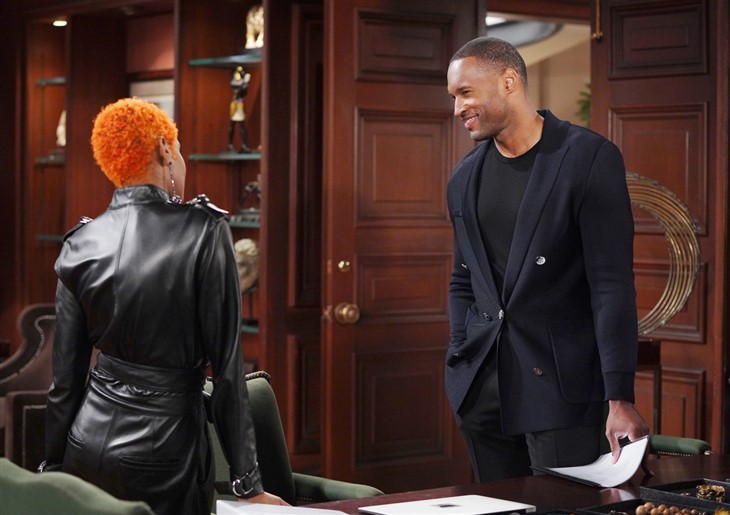 The Bold and the Beautiful spoilers for Tuesday, November 23, 2021, reveal Paris Buckingham not quite knowing what to do with two men who desperately want her. So, she turns to a third man.

The Bold And The Beautiful Spoilers – What Will Carter Walton Say?

Some unexpected developments have happened in Paris’s (Diamond White) life of late. She was all set to sublet Thomas Forrester’s (Matthew Atkinson) apartment, but then his house deal fell through so they became platonic roommates. She even had her boyfriend, Zende Forrester (Delon De Metz), over to her new place and they made love for the first time.

Then, shock of shocks, Thomas declared he has feelings for her and now Paris doesn’t know what to make of things. On the one hand, she really likes Zende. But on the other hand she also really likes Zende’s cousin, Thomas. What is a woman to do? Well, tell Carter (Lawrence Saint-Victor), of course, because that’s what women seem to do of late in this little Los Angeles circle.

Will Carter call Paris out on her hypocrisy of stringing two men along when she called him out for his Quinn Fuller (Rena Sofer) affair when he still planned to marry her sister, Zoe Buckingham (Kiara Barnes)? Or will Carter have words of wisdom like he’s had for Quinn and Katie Logan? Will another woman fall for Carter’s understanding ways?

Well, the truth is out there now. Finn (Tanner Novlan) knows that Jack (Ted King) is his biological father as a result of an affair he had with crazy Sheila Carter (Kimberlin Brown). Jack has been lying to Finn and Li (Naomi Matsuda) all these years and now Finn is not sure he can forgive his dad for all this deceit.

Jack thinks he’ll be able to get Sheila to stick up for him and explain everything to Finn. But nope, she tells him he’s on his own. She also thinks if Finn is mad at his father, but wants to know more about how he came to be, he will turn to her and she will finally have a chance with her son. Is she right? Stay tuned to The Bold and the Beautiful weekdays to see how this story plays out.