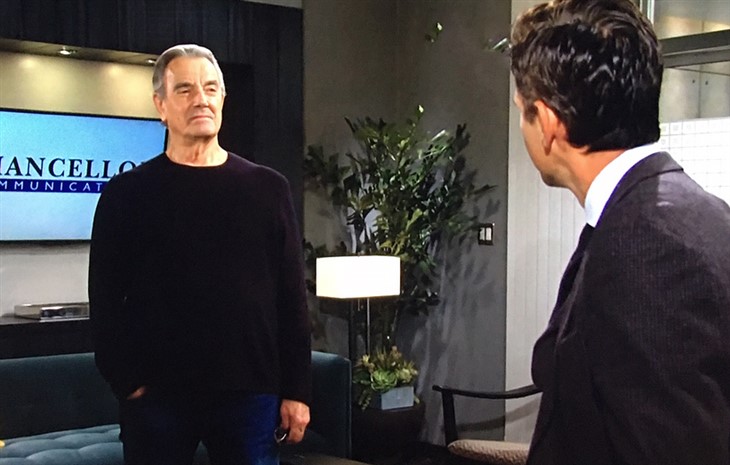 The Young and the Restless spoilers document that Victor Newman (Eric Braeden) does not want anything to undercut his first-born daughter’s happiness. The Moustache may even be willing to pay seven figures to keep a deep, dark secret under wraps.

The debut of Jessie Gains (Jamison Jones) happens this week on Y&R. He is an attorney who holds leverage over Ashland Locke (Richard Burgi) and is teased to demand three million dollars to remain silent.

However, Billy Abbott (Jason Thompson) is desperate to expose whatever Ashland is hiding as well.

The Young And The Restless Spoilers – Billy Abbott’s Instincts Confirmed

Billy knew that there was something fishy about Ashland’s sad-sack childhood tale. Sure enough, during the same week, a guy begins to text threats to Ashland.

Jesse knows something that is likely connected to Ashland’s early career. Of course, referring to Burgi’s character as Ashland is, in and of itself, incorrect. But viewers have not been allowed to know what his birth name was.

Thompson’s character believes he is protecting Villy’s children by going at Ashland so hard. Victoria Newman (Amelia Heinle) does not buy it and neither does Lily Winters (Christel Khalil). Nevertheless, if Jessie is legit, then Billy will be proven right.

Ashland is dying, right? It could be that Jessie knows that he is not.

It would be very ironic and also suspicious if Ashland realizes a miracle remission or better yet, a cure, shortly after he marries Victoria in Tuscany, Italy. So, having Jessie somehow be wise to Ashland’s assumed faked terminal illness could serve as a clever plot twist.

However, if Ashland is ill, then some nefarious business mark must exist. The outstanding issue related to his securing needed capital to purchase the television stations, that served as the origin for the Locke Communications Group, is a likely choice as Ashland’s hidden secret.

If Victor pays Jessie’s blackmail request, then he would be killing multiple daytime birds with one stone. The Moustache would obtain information that puts Ashland under his control, remove any roadblocks to Vashland’s marriage, and ensure that Newman Enterprises’ future was not being compromised. Billy would be stopped as well.

Having Y&R’s leading character play the hero and the fixer makes the most sense. That is the projection, with full answers being broadcast or streamed, per viewer’s preference, shortly.