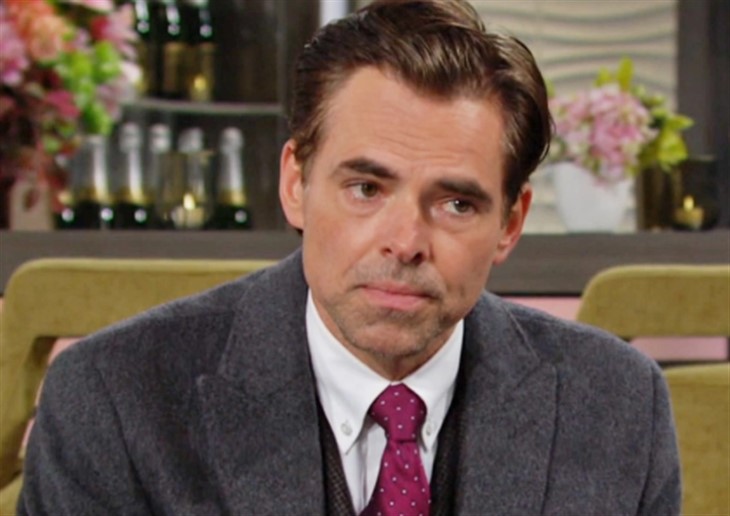 The Young and the Restless (Y&R) spoilers document that Billy Abbott (Jason Thompson) appears to have revealed that his next target is Victor Newman (Eric Braeden). Billy wanted Tara Locke (Elizabeth Leiner) to know what happened at the Newman Ranch just prior to her husband’s heart crisis.

Billy’s hit piece on Adam Newman (Mark Grossman) created major trouble in the recent past. Now, Billy is telegraphing his next move. Chance Com would be the ideal, so-called media outlet to slam Victor on The Young And The Restless.

The Young And The Restless Spoilers – Proxy War Seems Unstoppable

Billy’s big mouth and animus toward Victor are covers for deep issues. Both men are actually secondary enemies. Billy was an outgrowth of the rivalry Victor had with Jack Abbott (Peter Bergman), dating back to the 1980s. While Thompson’s character has never liked his former father-in-law, Adam has been the deeper target ever since Delia Abbott (Sophie Pollono) was killed.

The Moustache detests Billy because Victoria Newman (Amelia Heinle) loves him. Victor can’t stand that she still wants to be with him after all Billy has put her through and how that has impacted her children and the Newman family.

What qualifies Billy-boy as a journalist? He has no known education or training. The experience at Restless Style didn’t involve hard-hitting investigative work. However, his monied mother created this outlet at Chancellor Industries in order to channel her often wayward son’s energies.

The Young and the Restless spoilers hint Lily Winters (Christel Khalil) serves as the voice of reason. She is the wise counterbalance Jill Abbott Atkinson (Jess Walton) hired as a co-equal head at Chance Com.

BiLily’s eventual formation as a couple added a personal element to this intended business-only connection. She’s tried to steer Billy away from conflict with Adam, even taking to romantic distraction. But Thompson’s character never allows his thirst for claimed justice to venture far from his mind on the Young and the Restless.

The Young And The Restless Spoilers Monday, May 3: Adam’s Redemption, Tornado Terror, Nick’s Life On The Linehttps://t.co/W3kTGmqwaW

A clear path to Billy slamming Victor would be for Ashland Locke (Richard Burgi) to be interviewed on the record. A hit piece, where the famous owner of Cyaxares gives an in-person account of being forced to sign legal papers in order to gain access to paramedics during his heart crisis, would be gold.

Y&R spoilers reveal Ashland could use Billy to shed light on the reputation that Genoa City, Wisconsin’s most ruthless resident has once again affirmed. While the Lockeness Monster acted badly in pitting three bidders against each other, that would pale in comparison to Victor potentially allowing Ashland to die if he didn’t sign over Cyaxares.

Soap Opera Spy is a leading source for everything linked to The Young and the Restless. Check back regularly for Y&R spoilers and soap opera news!