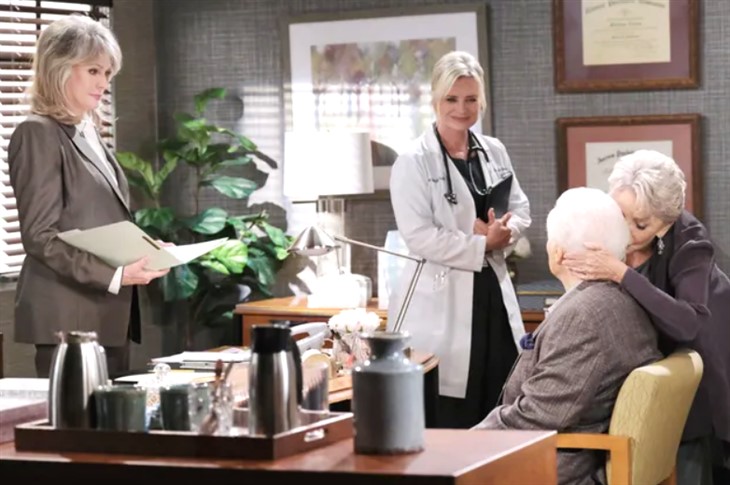 Days of Our Lives spoilers reveal that the devil might try to coerce Marlena Evans (Deidre Hall) into inviting him back in. To do that, the devil has to convince Marlena that there is no other choice. As the devil jumps from body to body, it could make doctors believe that there is a new infectious illness spreading that is affecting the residents’ behavior.

DOOL spoilers reveal that the devil infected Doug Williams (Bill Hayes) in order to reach Marlena. During the therapy appointment, the devil specifically mentioned Marlena’s stubbornness. This indicates that Marlena will continue to refuse the devil’s demand even though it caused Doug’s suffering.

The devil isn’t going to give up and certainly won’t accept Marlena’s refusal. Lucifer is determined to take over Marlena’s body again but he has to be invited in. Until then, the devil will try to come up with other ways to convince Marlena to give up and give in.

There are a lot of clues in recent episodes that other Salem residents could become possessed. As the devil jumps from one person to the next, it will make Marlena absolutely distraught. She won’t know what to do but the more of her loved ones that are affected, the more willing Marlena might be to give in.

Days Of Our Lives Spoilers – Higher Stakes in Possession Story

Plus, not everyone in Salem is going to believe in the devil. In fact, executive producer Ken Corday told Soap Opera Digest that Allie Horton (Lindsay Arnold) believes in hell and the devil. For that to be specifically mentioned indicates that not everyone will believe in it.

The medical community is filled with people who believe in science and not faith. There are exceptions, but generally, doctors follow what they can see, hear and feel. Just when Kayla Johnson (Mary Beth Evans) is perplexed about Doug’s mysterious condition, other Salemites could succumb to similar symptoms. This will make Kayla think there is a new sickness infecting Salemites.

Now, we know that Allie tells Tripp Johnson (Lucas Adams) about Marlena’s first possession. So, could Tripp try to tell Kayla that this is just like what happened with Marlena nearly 30 years ago? Will Kayla even believe it or will she try to solve an epidemic that doesn’t really exist? We will have to keep watching the NBC soap to find out!

B&B Spoilers: Sheila Carter Is Back For More Trouble