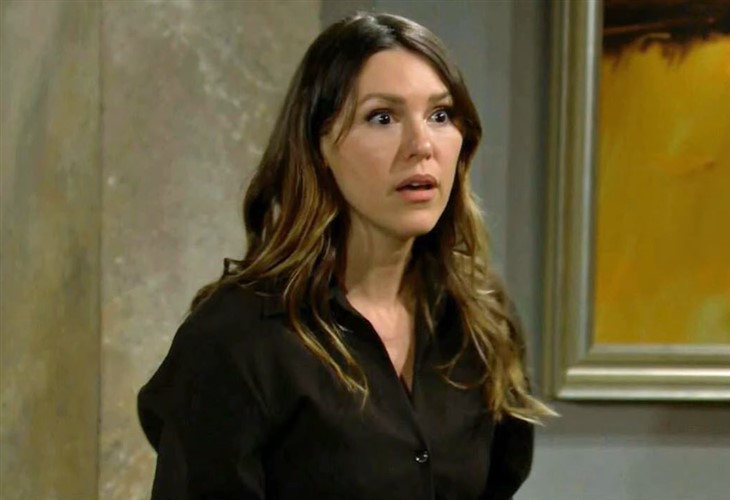 The Young and the Restless (Y&R) spoilers for Wednesday, October 20, 2021, reveal a furious Lauren Fenmore trying to figure out how Victoria Newman Locke didn’t end up wearing the dress she had designed for her.

The Young And The Restless Spoilers – Chloe Mitchelle On The Spot

It’s a good thing that Chloe (Elizabeth Hendrickson) is Lauren’s (Tracey Bregman) sister-in-law or she might come at her a lot harder for what she suspects she did. Lauren had what she thought was the perfect wedding gown all ready for Victoria (Amelia Heinle) and somehow she wore one designed by Sally Spectra (Courtney Hope). Now, how did that happen?

That’s what Lauren wants to know when she confronts Chloe, the woman Sally is now working with at Newman. She knows Chloe is a schemer and learned the hard way that Sally is a schemer, so she is sure Chloe helped make this dress caper happy. Will Chloe own up to knowing what Sally was up to or will she stay loyal to her old friend?

Nikki Newman (Melody Thomas Scott) has to try to keep the peace once again when Nick (Joshua Morrow) and Victor (Eric Braeden) are at odds. Victor still doesn’t like how his son meddled in Victoria’s affairs when he was told by both of them to stay out of things.

Nick has certainly made a mess of his life. Victoria is furious with him. Phyllis (Michelle Stafford) is angry at him for putting his foot in his mouth. And Victor is not the most forgiving man in the world, something Nick should know all too well by now. Will anything Nikki tries to say even help in this situation?

The Young And The Restless Spoilers – Billy Abbott In Retreat

Somehow Billy (Jason Thompson) came to the realization that he needs to let Victoria live her own life, even if he can see she is making a big mistake. She’s a big girl and he has to let her mistakes be her own. To that end, he impressed Lily (Christel Khalil) when he supposedly erased that video from Jesse Gaines.

Now, it’s time for Billy and Lily to pack up and leave Tuscany with a new outlook on life. They are the ones together and Victoria is now with someone else. Can Billy and Lily move forward now that he’s seemed to accept that? Stay tuned to The Young and the Restless weekdays to see how these stories play out.