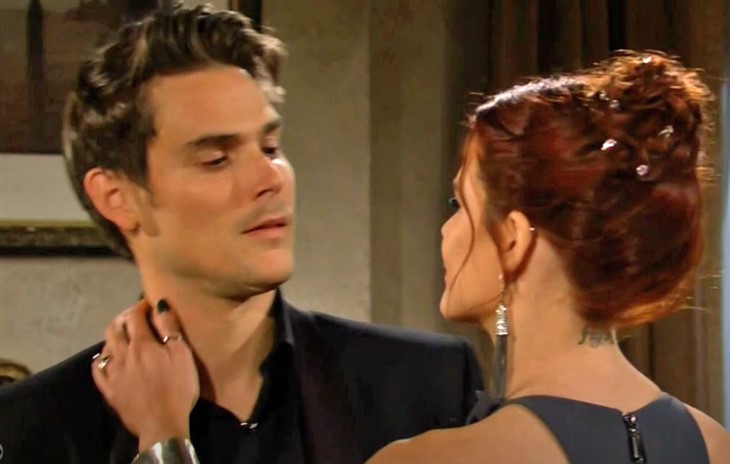 The Young and the Restless (Y&R) spoilers for Tuesday, October 19, 2021, reveal Adam Newman and Sally Spectra growing closer than ever before.

The Young And The Restless Spoilers – A New Beginning For Adam Neman And Sally Spectra?

Adam (Mark Grossman) may have told Sally (Courtney Hope) that they couldn’t be more than friends and business partners and he even wanted to nix the friends part, but Sally is anything if not persistent. She got Adam to take her to Victoria’s (Amelia Heinle) wedding and she managed to get Vicky to wear the gown she designed for her. Adam was impressed with that and on Tuesday, the pair celebrates her success.

Sally tells Adam the one opinion she really cares about is his at the moment and pulls him into a passionate kiss. They happen to be in a room with a bed nearby so will this kiss lead to something more sooner rather than later?

Nick Newman (Joshua Morrow) just keeps stumbling into problems as he puts his foot into his mouth. He mentioned to Phyllis Summers (Michelle Stafford) that he’s now with a woman with a sordid past, so maybe it is ok for his sister after all. Well, that sent Phyllis into a justifiable tizzy after she was already angry at him for not minding his business and not staying out of Victoria’s life decisions.

Phyllis takes her troubles to Jack Abbott (Peter Bergman) and Nick is furious as she watches them together. He knows how much Jack is still in love with his girlfriend so seeing her run straight to her ex-husband and confide in him leaves Nick shaken.

However, it’s not just Phyllis that Nick is having problems with. His father is also furious with him. The Great Victor Newman (Eric Braeden) takes his son to task for all his meddling and it’s not pretty despite Nick trying to apologize. Perhaps Nick should have headed back to Genoa City when he had the chance and not stayed to lurk at the wedding. He would probably be having a more peaceful time by now. Stay tuned to The Young and the Restless weekdays to see how if anyone actually gets married in Tuscany.