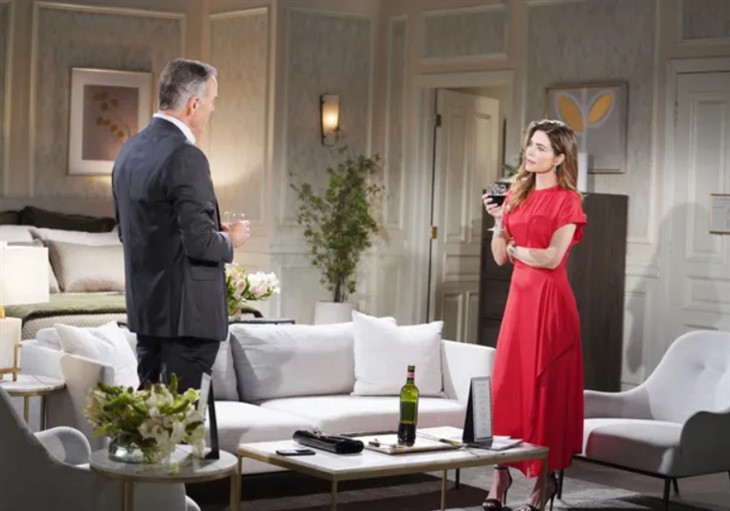 The Young and the Restless (Y&R)  spoilers for Thursday, October 7, 2021, reveal Victoria as anxious as ever to marry a man she barely knows and Billy doing everything he can to stop her.

Victoria Newman (Amelia Heinle) and Ashland Locke (Richard Burgi) have made it to their Tuscan villa to marry after knowing one another for a few short months. Nikki Newman (Melody Thomas Scott) did the best she could to talk Victoria into delaying the wedding or canceling it altogether because clearly, her daughter’s fiancé has an aversion to the truth.

When Nikki and The Great Victor Newman (Eric Braeden) arrive in Italy, they know there is something very wrong going on and try to steer things in the right direction for Victoria’s sake. Everyone is ready for a big wedding, though, and a whole crew is in town to see Victoria marry a man who is allegedly dying and may have killed the real Ashland Locke decades ago.

Plus, there’s Sally Spectra (Courtney Hope) who needs Victoria to wear the dress she designed. The same dress she didn’t bother telling Victoria about because she just wants her to fall in love with it and wear it not knowing who created it.

If there’s anyone more determined than Billy Boy Abbott (Jason Thompson) to make sure Victoria stays single, we have yet to see that person. Victoria has told him to stay away from her wedding and stay out of her life because she is a grown woman who can make her own sound decisions about men (there is a lot of storyline evidence to the contrary).

But Billy knows something Victoria doesn’t and he feels he has to use that information just right and at just the right time to ensure his ex-wife and the mother of his two children doesn’t make the biggest mistake of her life.

Will he get any help from anyone? Will Lily (Christel Khalil) actually get herself involved with this considering he is using his job as a supposed journalist as an excuse for all this investigating? And is Billy right about everything? Is Ashland really as bad as fans suspect? Stay tuned to The Young and the Restless weekdays to see how these stories play out.