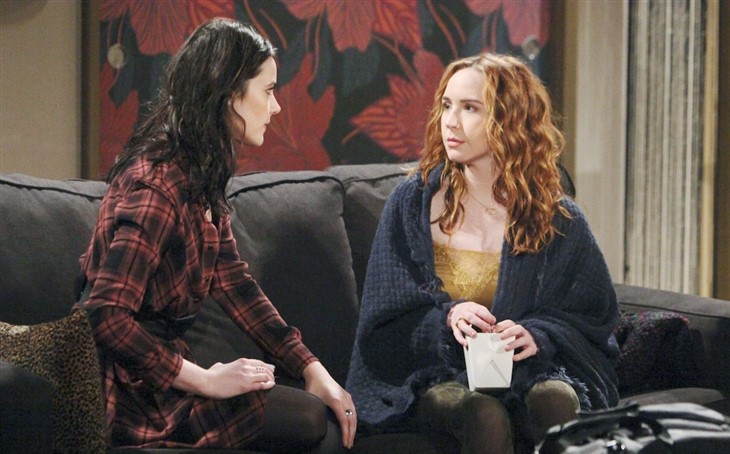 Viewers of The Young and The Restless will recall that Mariah has had a hard time disconnecting emotionally from “Bowie”, the baby she carried for Abby Chancellor (Melissa Ordway) and is now named Dominic Chancellor (unnamed infant actor). Mariah went through quite an ordeal during her pregnancy with the baby. She was kidnapped by Ben “Stitch” Rayburn (Sean Rayburn) and held for several months, with the result being that she went into labor by herself – if Abby and Devon Hamilton (Bryton James) hadn’t gotten there when they did, she’d have given birth on her own!

Devon delivered baby Dominic, who she had been talking to in her belly the whole time she had been in captivity, so of course, with the baby her only friend during those months she would have gotten overly attached! Plus, Mariah has been dealing with postpartum depression in addition to some post-traumatic stress disorder symptoms and focusing on her work and trying to get better.

Y&R Spoilers – Mariah Wanted To Rush Into Having Another Baby, With Tessa Being The Surrogate

Y&R spoilers indicate Mariah had wanted to rush into having another baby, but with Tessa being the surrogate this time. She had been told to wait before getting pregnant again so soon, and the timing wasn’t right either – it was too soon after giving birth to Dominic and there was danger of her subconsciously wanting a replacement baby. Tessa wasn’t ready to have a baby, although they talked about maybe someday-just not right now.

Either could have used her eggs to have the artificial insemination done, but Tessa isn’t ready to be a parent even if Mariah was carrying the baby. Y&R spoilers hint Mariah was blindsided when Tessa asks Mariah if she has her heart set on having a biological child of their own, or if she might consider adoption. Mariah can see Tessa is uncharacteristically excited about the prospect of adopting a baby all of a sudden, and she wants to make sure that Tessa isn’t just trying to placate Mariah.

The Young And The Restless Spoilers – Tessa Seems Ready, Willing And Able – To Adopt A Baby

Mariah will be amazed that Tessa seems ready, willing and able –to adopt a baby! Viewers of The Young and The Restless know that even in this day and age, same sex couples face challenges when it comes to adopting children, and Mariah and Tessa are prepared for those challenges. They expect the process they will need to go through to find and adopt a baby, or if need be, a young child may take a while to find a good fit. It’s even possible that once they begin this journey of adoption, they may not really be as ready for it as they might think!