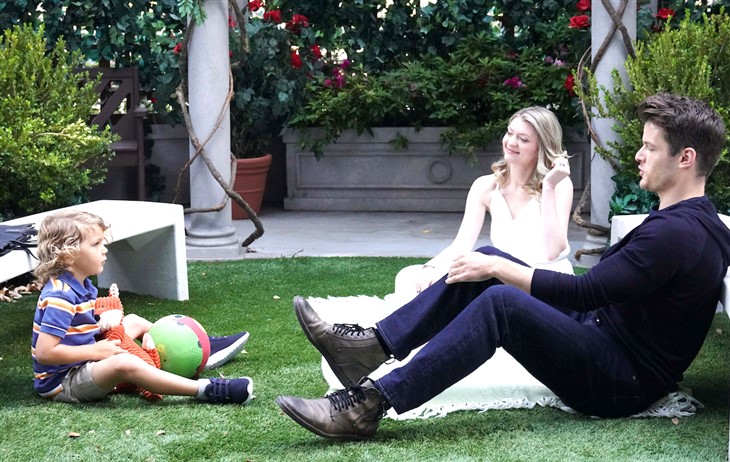 The Young and the Restless (Y&R) spoilers reveal that Tara Locke (Elizabeth Leiner) will be exposed. In a preview clip, she loses her composure while telling Sally Spectra (Courtney Hope) how her life will be ruined if the truth comes out. It is teased that Tara flees Genoa City with her son. Ashland Locke (Richard Burgi) and the Abbotts will search for Harrison Locke (Kellen Enriquez).

The Young And The Restless Spoilers – Tara Locke Is A Runner

Y&R spoilers reveal that Tara is a runner. When Ashland caught on to the fact that she betrayed him with Kyle Abbott (Micheal Mealor), she ran away. She grabbed her son, a nanny and floored it to Genoa City. She was in a panic when telling Kyle that she had to disappear with Harrison or Ashland would take the little boy away from her. Historically, Tara always runs when she is confronted with her deceptions and betrayals. Then she exaggerates and embellishes the story to paint herself as the victim.

During the week of August 2, Summer Newman (Hunter King) will be pushed to the breaking point. Phyllis Summers (Michelle Stafford) and Nick Newman (Joshua Morrow) video chat with their daughter. As Nick sits in the background, Phyllis demands the whole truth. Summer finally breaks down in tears and admits she was forced to take the job in Milan. When Phyllis asks for a name, Summer says it was Tara.

Meanwhile, Kyle and Jack Abbott (Peter Bergman) are starting to realize that Tara isn’t the person she pretended to be. So, the walls in all directions are beginning to close in on Tara.

The Young and the Restless spoilers suggest that Tara will react the same way she always does when backed into a corner. She will go on the run and will take Harrison with her. She might have custody of her son but Ashland is still the boy’s legal father. The longer that Tara and Harrison are missing, the less chance there is of finding them.

Ashland will use all of his resources to find Harrison. We imagine Victoria Newman (Amelia Heinle) will do her part to help locate the missing boy, as well. Then, there is the Abbott family. Despite Ashland and Kyle not getting along, they both love Harrison and could join forces to find the little boy. Jack believes that is his grandson, so he will join the search.

As for Billy Abbott (Jason Thompson), he will probably do his part by publishing a story about the missing mother and son. The more people that see the photos, the quicker Harrison can be returned safely. Keep watching the CBS soap to find out what happens next with this storyline.