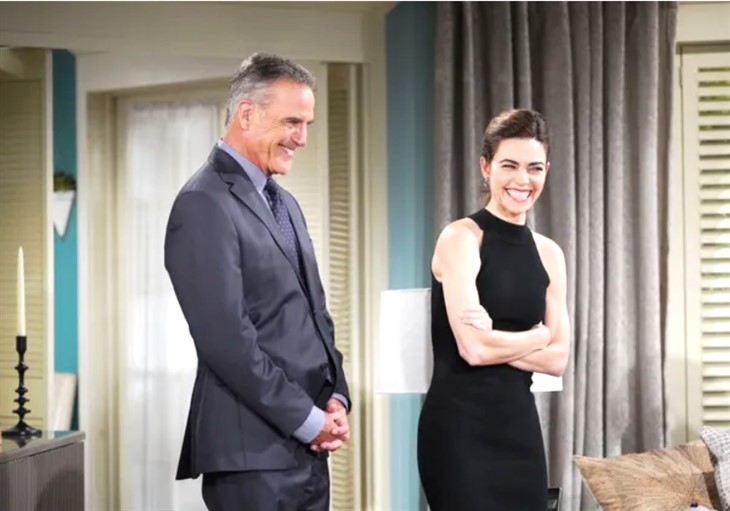 The Young and the Restless spoilers for Monday, August 2, 2021, reveal in Genoa City, Wisconsin, Ashland making a momentous decision about his life — and death.

The Young And The Restless Spoilers – Will Victoria Newman Get What She Wants?

Victoria (Amelia Heinle) had already fallen hard for Ashland Locke (Richard Burgi) when she learned he had cancer and odds are he was going to die sooner rather than later. Ashland knew there was an experimental treatment, but he didn’t want to put himself through that. Victoria agreed to be by his side and is now in more than ever before, with Ashland even living with her.

Ashland now told Victoria he wants to at least hear more about the experimental treatment and on Monday, he makes a decision about it. Does he have the will to live now because he found love with Victoria or does the doctor tell him his odds are worse than before?

Knowing that Kyle (Michael Mealor) and Jack (Peter Bergman) did not think her elevator video was definitive proof that Tara (Elizabeth Leiner) and Sally (Courtney Hope) worked together to run Summer (Hunter King) out of town, Phyllis (Michelle Stafford) decides she has to look for more evidence of who these two women really are.

To that end, she travels to Los Angeles to meet with Eric Forrester (John McCook) and makes a shocking discovery. She then has to ask Eric some questions he will likely answer. And this discovery might actually get Jack and Kyle to wake up and Summer to come home where she belongs. Of course, if Summer does return to Genoa City, will she and Kyle decide to stay?

Meanwhile, it looks like Jack Abbott is starting to catch on without another nudge from Phyllis. Sally has to quickly cover her tracks when Jack asks more questions — and covering her tracks with her myriad of lies is getting harder and harder.

What lie will she be caught with on Monday? Will this finally be the end of her time in GC and her on-again/off-again romance with a man who is certainly more than twice her age? Stay tuned to The Young and the Restless weekdays to see how these stories play out.