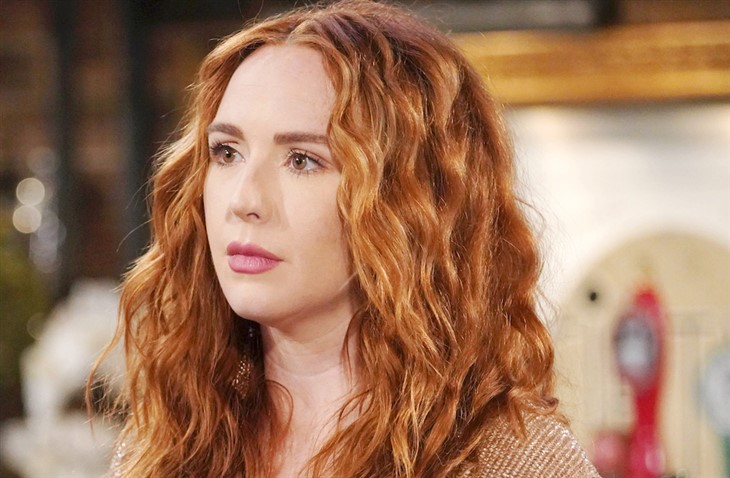 The Young and the Restless (Y&R) spoilers for Friday, August 13, 2021, reveal Sharon finally panicking over her missing daughter.

Tessa (Cait Fairbanks) had been saying for weeks that it made zero sense that Mariah (Camryn Grimes) would just up and leave with no word, only communicating through group text messages that didn’t sound like her at all. It took until this week for Sharon (Sharon Case) to finally realize Tessa might be onto something because Mariah would never miss such an important doctor’s appointment just because she needed a little peace and quiet away from Abby Newman (Melissa Ordway).

On Friday, Sharon realizes that Mariah is very diligent about her career and would never miss a day of work for no reason. When Jack (Peter Bergman) questions Sharon on where Mariah is and says he might have to give her job away, Sharon knows something has to be wrong and finally goes into panic mode. At least she’s married to a detective who can find missing people, right? She sure hopes so as she orders Rey (Jordi Vilasuso) to find Mariah as soon as possible.

Don’t ever mess with The Great Victor Newman’s family because as he says, family is everything. So, Victor (Eric Braeden) has a few things to say to Ashland (Richard Burgi) now that he knows he is planning to marry her daughter. Victor asks the man what his true intentions are towards Victoria (Amelia Heinle). Will he manage to convince Victor he is being sincere and truly loves the woman? He seems to love her and Victoria is clearly head over heels, but this is also the woman who married Billy Abbott (Jason Thompson) multiple times and nearly married a man she met in a bar a few years back.

Victor is usually pretty astute and can tell when someone is trying to play games with him and his children. Will Victor decide that Ashland is the real deal? Or are some fans correct in thinking Ashland is truly up to something and Victoria better watch her back? Stay tuned to The Young and the Restless to see how these stories play out.