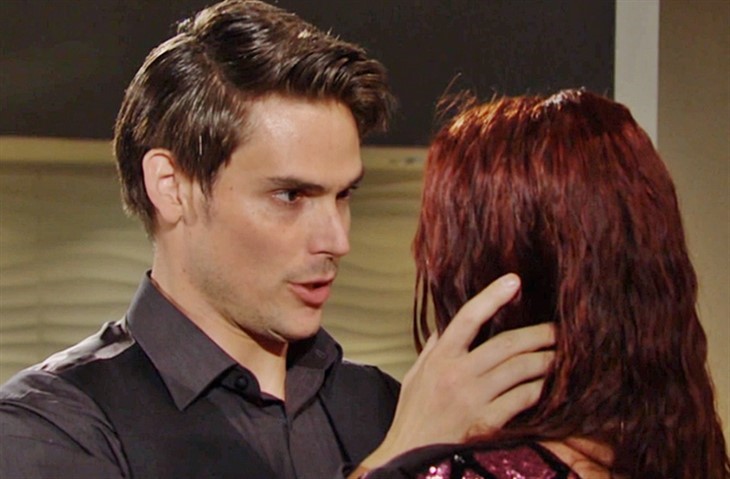 The Young and the Restless spoilers document that Adam Newman’s (Mark Grossman) instincts told him to squash Sally Spectra’s (Courtney Hope) attempt to couple with him. But this is daytime. So, how long can that feeling hold?

Chloe Mitchell’s (Elizabeth Hendrickson) tell to Sally pushes pause on an immediate coupling, with Connor Newman (Judah Mackey) being the emotional reason not to. Despite Sally’s penchant for self-promotion, she does have a heart and pledges to resist pursuing Adam.

So, Sally will understand that Connor hopes his parents will reunite, making any public pairing with Adam a traumatic event for Mackey’s character.

The Young And The Restless Spoilers – Chelsea Lawson’s Wild Ride

Adam and Chelsea Lawson (Melissa Claire Egan) aren’t married now. So, he is single and doesn’t outwardly project the feelings of love for the woman he married, divorced, remarried, and then divorced again.

However, Y&R fans saw that Chelsea was all-in for Adam many months ago. That was as he was sliding off the rails and decided to wipe the Newman family off the earth.

Chelsea’s catch of the Newman Towers schematics on Adam’s laptop led to her abduction. A stroke followed, with temporary paralysis and a loss of speech causing Chelsea’s mind to break. That sequence caused Adam to feel deep guilt.

Chelsea’s need to help her mother’s recovery in Minnesota afforded Adam a chance to be magnanimous. His backing of Chelsea’s request to take Connor with her to see Anita Lawson (Catherine Bach) allowed the heated soapy waters to cool.

Through her supervised visit out of Genoa City, Wisconsin, and conditioned stay with Anita, Chelsea has gained a new perspective. Adam wasn’t cheating with Sharon Rosales (Sharon Case) or tormenting Egan’s character to the degree that was previously believed.

Chloe has already experienced Sally’s disruptive and erratic nature. Adam knows all about Hope’s character and senses, like everyone, that she can’t be trusted.

Chelsea’s anticipated return this autumn should include some form of Chadam revival talk. If Sally hasn’t made career and personal progress she feels is reasonable, it is fair to believe she will insert herself into Adam’s world. And with that fireworks and personal confrontations are probable on Y&R.