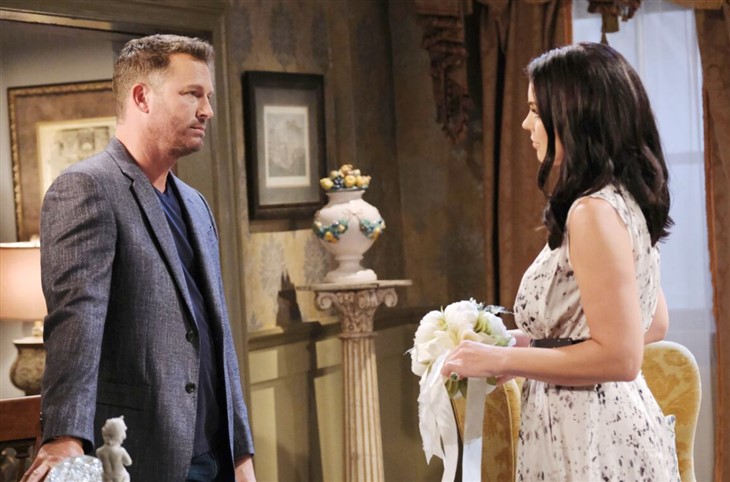 Days of Our Lives (DOOL) spoilers and rumors tease that in Salem Chloe Lane (Nadia Bjorlin) will catch Bonnie Lockhart’s (Judi Evans) bridal bouquet, and will eventually marry Brady Black (Eric Martsolf) in upcoming episodes of Days Of Our Lives!

Photos from Days of Our Lives for the week of September 6 show Chloe holding Bonnie’s bridal bouquet as Brady asks her to move in with him. Apparently Chloe and Brady arrive at the Kiriakis mansion shortly after Xander Cook (Paul Telfer) crashes Bonnie and Justin Kiriakis’ (Wally Kurth) wedding. Days of Our Lives viewers will recall Xander figured out that Bonnie stole the money he was supposed to have given back to EJ DiMera (Dan Feurreriegel).

He then immediately rushed over to the Kiriakis mansion to confront Bonnie about the theft! So, Bonnie may not toss out her bouquet in a traditional manner – but since she doesn’t have any bridesmaids, when Brady and Chloe arrive, she might just toss it to Chloe, the only single woman in the room! Bonnie, unfortunately, will have a mess to straighten out as Eli and Lani Grant (Lamon Archey, Sal Stowers) take her into the station for questioning, wedding dress and all!

Days of Our Lives viewers will recall that Philip Kiriakis (Jay Kenneth Johnson) has a huge jealousy problem over Chloe! Philip sends Brady a threatening email over Chloe, after having previously threatened to kill him if he messed with her! Philip is extremely possessive and beginning to act controlling, and Chloe made it quite clear to Philip that kind of behavior was a turn off when he followed her and Brady on their business trip which got sidetracked.

Days of Our Lives viewers will recall that they were headed for New York City but had plane trouble which landed them in a small town in Pennsylvania, where they were forced to share a room and also shared the bed. This was after Chloe didn’t want Brady to hurt his recent injuries. Then Philip barged in when they were both in the bed – after he left, Chloe made a bed for herself on the floor. It may be the threatening email that spurs Brady and Chloe to go to the Kiriakis mansion, probably looking for Philip! They will arrive to a horrible situation for Bonnie and Justin, and in the midst of that, with Bonnie’s bouquet in Chloe’s hands, Brady invites her to move in with him!

Days of Our Lives spoilers and rumors tease that Chloe will decide between Philip and Brady, and she’ll choose Brady over the conniving and controlling Philip! Longtime Days of Our Lives viewers will recall that Brady and Chloe were married twice in the past, but it didn’t work out. But now Brady had shown himself to be a responsible and caring father, and hasn’t fallen off the wagon as he previously did, breaking up his marriages to Chloe. Chloe has seen firsthand how loving and attentive Brady is to his little girl with Kristen DiMera (Stacy Haiduk), Rachel Black (Finley Rose Slater). Chloe has also seen how Brady has grown up and matured, and how extreme stress regarding Kristen has not driven him back to drinking or drugs. It’s only a matter of time before Chloe and Brady are the ones marrying in the Kiriakis mansion!