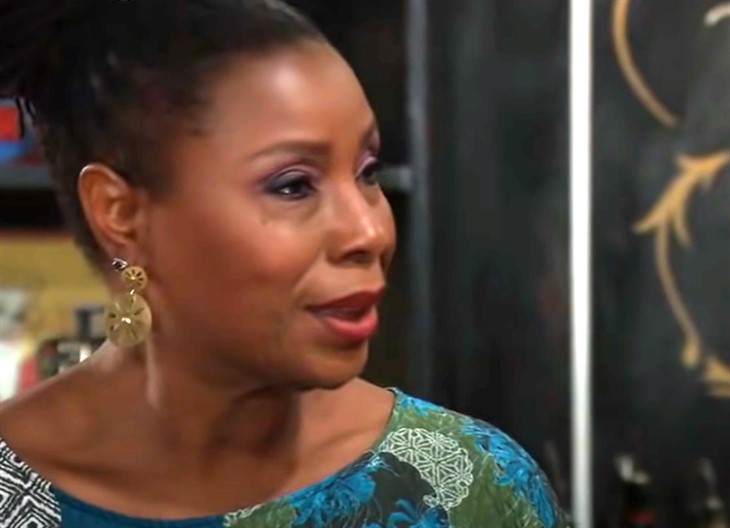 General Hospital (GH) spoilers and rumors tease that Phyllis Caulfield (Joyce Guy) will move to Port Charles , NY after the fire at the Tan-O, not only to support Nina Reeves (Cynthia Watros) but also to make amends with her estranged relative – it will turn out that she is Shawn Butler’s (Sean Blakemore) older sister! General Hospital viewers will recall that Phyllis mentioned a relative that she had become estranged from!

General Hospital Spoilers And Rumors – Phyllis Caulfield Will Have Nothing Left In Nixon Falls, Pennsylvania

General Hospital viewers know that Phyllis would have nothing left in Nixon Falls, Pennsylvania after the Tan-O is a total loss after a fire. She would have her job, but “Mike” aka Sonny Corinthos (Maurice Benard) will get his memories back after the fire, according to other General Hospital spoilers and rumors. Nina will have no reason to stay either, and Nina will go back to Port Charles, likely asking Phyllis to come with her.

Phyllis will easily be able to get a job at General Hospital, but she will also find out that her estranged relative lives there. She will rediscover, and possibly now, years later, reconcile with her younger brother Shawn Butler! General Hospital viewers know that Phyllis is fairly forgiving and accommodating, but with her late husband Lenny Caulfield (Rif Hutton) having been a Marine, Phyllis’ brother having killed a fellow soldier under friendly fire circumstances may not have set well with either of them. Then Shawn worked as an enforcer for Sonny for a while – whom Phyllis may be shocked to find out is “Mike”!

General Hospital spoilers and rumors tease that Phyllis may realize now how important family relationships are, now that she has been widowed. It is a good possibility that once she realizes that her younger brother Shawn, who she has had nothing to do with for many years, lives right there in Port Charles and will reach out to him for reconciliation.

Over the years, Shawn may have wondered whatever happened to his older sister – he may not have even known that she was alive! Longtime General Hospital viewers will recall that Shawn didn’t know he had any family at all, or at least didn’t mention any, when he first came to Port Charles. Later, it was revealed that he is TJ Ashford’s (Tajh Bellow) birth father, which neither of them knew until TJ was a young teen. If Phyllis and Shawn do reconcile she then will find out that she is also an aunt to a young man who has become a doctor and works at General Hospital –which should make her very proud!

Longtime General Hospital viewers will recall that Shawn was kind of a lost soul with post-traumatic stress disorder issues when he first hit Port Charles. Sonny was the only person who would give him a job, and that was back when Jason Morgan (Steve Burton) was presumed dead. This “enforcer” job with Sonny was what helped lead to Shawn’s stint in prison, because he was out on a hit for Sonny when another hit man Nikolas Cassadine (Marcus Coloma) had shot Hayden Barnes (Rebecca Budig) at the same time, and Shawn took a plea bargain. More recently he’s out to clear his name, but General Hospital viewers know that having reconciliation with an estranged sibling can only make life better for Shawn. Phyllis will have a younger brother to focus on as well, and it can only be good for both.