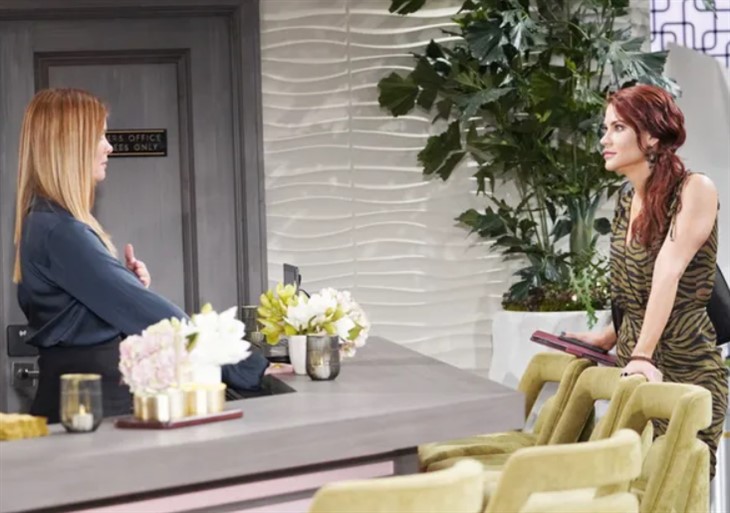 The Young and the Restless spoilers for Thursday, September 2, 2021, reveal in Genoa City, Wisconsin some ice-cold fireworks at The Grand Phoenix when Sally Spectra arrives on the arm of Adam Newman.

The Young And The Restless Spoilers – A New Genoa City Rivalry For The Ages?

It doesn’t matter that Sally (Courtney Hope) is at the Newman Media launch party both as an employee and as Adam Newman’s (Mark Grossman) date. Phyllis (Michelle Stafford) doesn’t want her there and that’s all that counts. She already kicked her out of the hotel and told her to find a brand-new place to live, but Sally just loves throwing Phyllis Summers off so she’s really enjoying taunting her as the night goes on.

Eventually, Phyllis can’t take it anymore and the two women go at it. Sally gets so angry she throws a drink in Phyllis’s face and that might be one of Sally’s dumber moves. Phyllis will not take that act lying down and retaliates by pouring a bucket of ice right over Sally’s head. Have these two women met their matches? Is this a rivalry that can go on for years and only result in good, old-fashioned soap opera fun? We sure hope so!

Billy Abbott (Jason Thompson) just can’t seem to have a good week. First, Victoria (Amelia Heinle) was angry at home, then it was Victor’s (Eric Braeden) turn, and now, it looks like Lily (Christel Khalil) has a problem with her boyfriend. It looks like Billy is caught in a compromising position and we have a feeling this has to do with digging for more information on his latest obsession, Ashland Locke (Ashland Locke).

Now that Amanda (Mishael Morgan) is finished investigating her family and Devon (Bryton James) has rescued Mariah (Camryn Grimes) and met his son who is not legally his son, he and Amanda spend some free time just catching up. Does she have any advice for the new dad who never actually signed an agreement with Abby (Melissa Ordway) to give up all rights to the baby she is calling Dominic? Stay tuned to The Young and the Restless weekdays to see how this surrogate story plays out.