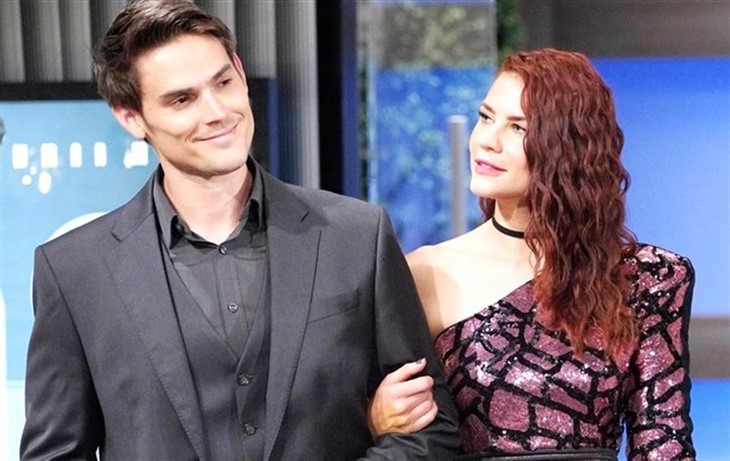 The Young and the Restless (Y&R) spoilers indicate in Genoa City, Wisconsin Sally Spectra (Courtney Hope) may have an ulterior motive in hooking up with Adam Newman (Mark Grossman).

Sally has been growing close to her boss. As Y&R fans saw last week, the two shared a steamy kiss. Sally and Adam’s romance has fans excited, but that feeling may not last long.

Adam has put the brakes on him and Sally. However, it’s obvious the fashion designer is still hung up on her boss. But are her feelings for him genuine?

The Young And The Restless Spoilers – Is Sally Spectra After Adam Newman’s Money?

As seen in the past, Sally’s got a habit of scheming to get what she wants. When she arrived in Genoa City, she struck up a relationship with her boss Jack Abbott (Peter Bergman). Sally’s bond with Jack helped her maintain her stay at Jabot, yet her plot against Summer Newman (Hunter King) and Kyle Abbott (Michael Mealor) ultimately lead to her downfall.

Sally quickly landed back on her feet thanks to Chloe Mitchell (Elizabeth Hendrickson), who helped her get a job with Newman Media. Now Sally’s professional and personal life is heating up thanks to her closeness with Adam.

Yet, Y&R viewers are skeptical when it comes to Sally’s motives. Does she really care about Adam as a person? Or is she more interested in his money and social status?

One person who has their doubts about Sally, is Adam’s father Victor Newman (Eric Braeden). After what Sally did to his granddaughter, one could understand why The Moustache wouldn’t want her anywhere near his family.

When Victor learned Adam hired Sally to work for Newman Media, the patriarch was less than thrilled. However, Adam was firm in his decision that Sally stay with the company.

With Sally worming her way into the company and family, Victor’s going to be keeping a close eye on her. His suspicions toward Sally will increase when he notices she’s spending a lot more time with Adam.

With Adam and Sally growing closer, Victor isn’t going to happy. Given Sally’s history, the Newman patriarch will wonder if Sally’s feelings for Adam are genuine.

The Young And The Restless Spoilers – Does Sally Spectra Really Love Adam Newman?

Whether Sally really loves Adam or not remains to be seen. Y&R fans love them together and believe they’re a good match. Sally and Adam are both troubled individuals who receive bouts of criticism from other Genoa City residents.

Despite their pasts, Sally and Adam have been trying to pave new paths for themselves, which has led them to where they are now. Being with a Newman will bring a lot of attention to Sally and do wonders for her career. Yet, a part of her deep down is falling for Adam, hard and fast.

Sally already lost a lot due to her scheming, and now that she’s received a second chance, she doesn’t want to screw it up.