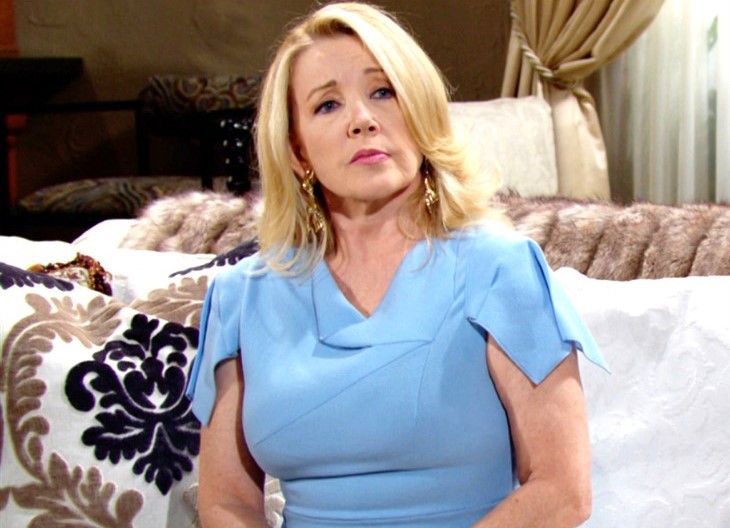 The Young and the Restless (Y&R) spoilers for Wednesday, September 29, 2021, reveal Nikki Newman getting sick of Billy Abbott and all his antics.

The Young And The Restless Spoilers – Mama Bear Comes Out

Nikki (Melody Thomas Scott) has been all-in trying to make sure Victoria Newman (Amelia Heinle) has the wedding of her dreams. She wasn’t sure about Ashland Locke (Richard Burgi) at first, but Victor Newman seems to have embraced him and Victoria is sure she knows what she’s doing marrying this man, so she will support them.

Part of that support involves calling off Billy (Jason Thompson), who is obsessed with finding dirt on Ashland in his weird quest to save Victoria. Nikki lays into her former son-in-law with fire and fury and warns him to leave well enough alone or he will have to answer to her. Something tells us those threats are not going to work. Billy has a one-track mind and not even girlfriend Lily (Christel Khalil) has been able to change it. After all, he is doing journalism, right?

While Nick Newman (Joshua Morrow) is off in New Jersey trying his best to also dig up dirt on Ashland Locke and save his sister from himself, Phyllis Summers (Michelle Stafford) needs something to do, so she spends some time with Jack Abbott (Peter Bergman). It certainly doesn’t make Jack sad, but how will Nick feel about this all when he returns? Maybe he won’t even care because he’ll be too busy telling Victoria and Ashland he finally knows the truth. And it looks like Victoria won’t even care.

Ashland has taken to Nate Hastings (Sean Dominic) as quickly as he took to Victoria and they are now oddly best buddies with Nate set to be his best man. Perhaps Nate can see that the man is making a lot of mistakes with his life without Ashland even saying so because he gives Ashland some unsolicited advice on Wednesday. Will he take it? Ashland seems to be a man who just does whatever he thinks is best — even if it’s not best. Stay tuned to The Young and the Restless weekdays to find out.