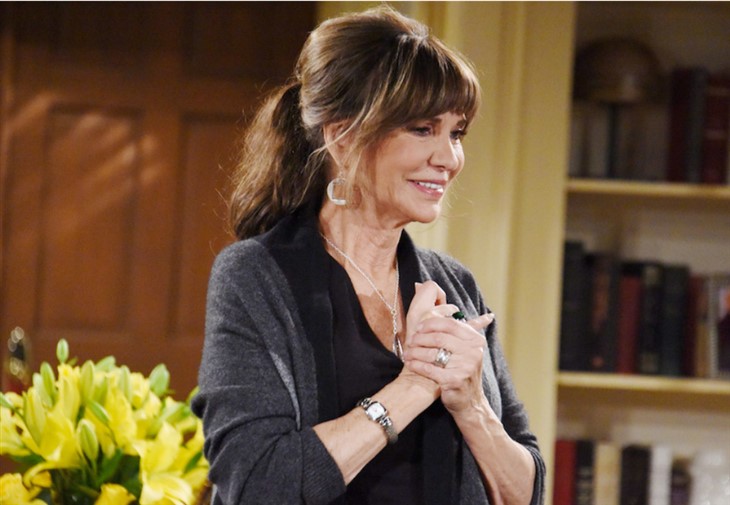 Next Week On The Young And The Restless – Confronting Kim Delaney

Y&R next week spoilers reveal that Abby found a clue in Chance’s memento box, which led her to call Kim Delaney (Roxanne Hart). Abby remembers Chance talking about Kim and her husband. The medics treated Chance like family and would do anything for him. Even though Kim wouldn’t confirm anything during that initial phone call, she ended up calling Abby back. Kim confirmed that Chance was with them but needed Abby.

During the week of November 29, Abby will question Kim about why nobody called to say Chance was alive. That is when Chance walks into the room and makes a statement.

In the weekly preview clip, Chance says that he wouldn’t let Abby be called because it would put her in great danger. Once Abby hears Chance’s voice, she freezes for a moment before spinning around. Abby can’t believe that Chance is really standing in front of her and leaps into his arms. Even though they are reunited, this story isn’t over yet. It is suggested that Abby’s arrival could put both her and Chance in great danger.

The Young And The Restless – Jill Abbott’s Bombshell

The Young and the Restless spoilers reveal that Lily made a distress call to Jill. However, Jill is the one to drop a major bombshell on Lily. In the preview clip, Jill announces that she wants Lily to take over ChancComm for her.

Lily does accept as it is teased that she adjusts to her new role in the company. However, it also requires her to make tough decisions. One will be whether Billy Abbott (Jason Thompson) should continue at the company or be allowed to step down.

The Young and the Restless Spoilers: Amanda Sinclaire Celebrates

Finally, there is Amanda and Imani, who are celebrating. It is indicated that Sutton Ames (Jack Landron) is found guilty and goes to prison. This allows Amanda to focus on what is next: her law firm.

Amanda asked Imani to take the bar exam and join her as a partner in the law firm. As the two clink champagne classes, Amanda makes a toast to Sinclair & Benedict. That is when Imani suggests it should be Benedict & Sinclair. Now, we hope that Imani is just joking with Amanda, but it could also hint at a future business battle between the sisters.