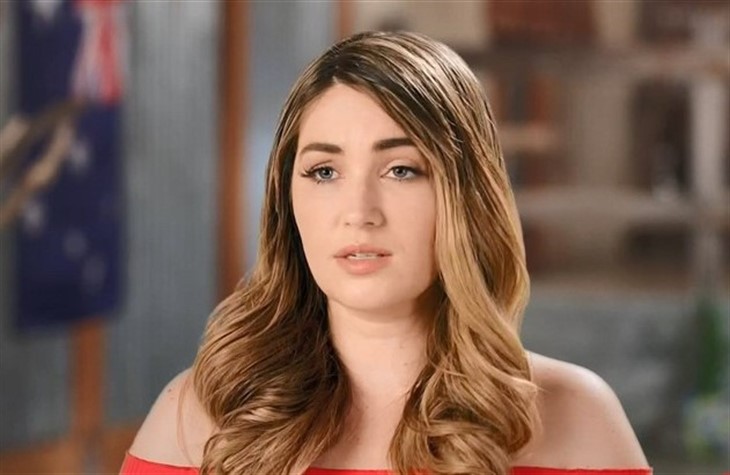 90 Day Fiance fans met Stephanie Matto when she appeared with her Australian girlfriend, Erika Owens. Supposedly, she was the first same-sex couple on the show. However, fans soon realized that she seemed just not into women. Anyway, they split and she returned to her OnlyFans and YouTube incomes as an influencer.

Since then, she started her own adult content site called Unfiltrd. Now she sold some bottled farts and claimed that her stock sold out super-fast. Fortunately, she seems to have an unlimited supply, so she restocks soon.

When Stephanie arrived on the TLC show, she was introduced as an influencer. Well, before that, hardly any of her colleagues in the show ran OnlyFans accounts. Apparently, she became something of a trend-setter. Some of the cast members seem to earn quite good money off it. She told her fans that she sold photos of herself with no clothes in and maintained good relationships with her regular clients. Well, some of them seem so eager for more of her that they paid good money for her farts in a jar. Perhaps, that sort of innovation attracted Deavan Clegg who joined her on her new adult website.

90 Day Fiance Stephanie Matto advertised her fart in a jar on her Only fans account. Then just days later, she reported back on Twitter that she sold out. In her post, she said, “Hey loves! I have officially sold OUT of my farts in a jar over on @unfiltrdfans! I will be working on an additional 25 orders next week. Go to http://unfiltrd.com/stepanka to pre-order! 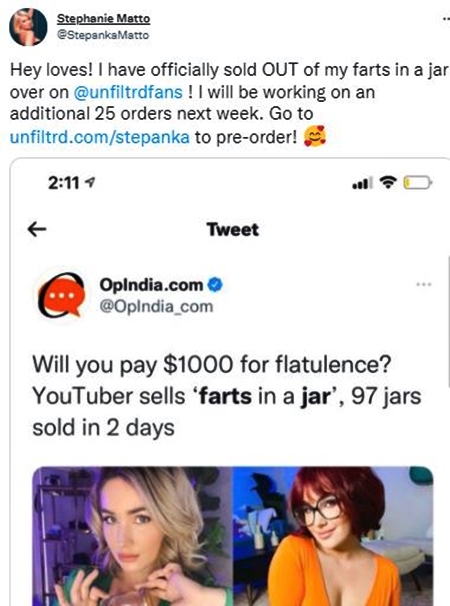 Well, if you think that’s questionable, her mom also seemed perplexed by her daughter when she dated Erika Owens. A lot of fans now also seem a bit bewildered. While Twitter fans loved the idea, Instagram fans were not so delighted at the news.

The Instagram account Before They Were Famous shared a post by Stephanie Matto about it. Knowing the rather eccentric ways of the TLC star, most people take it as real. However, one follower asked, “Seriously??????????????????????omg.” However, it really does look genuine.

Fans responded to the post, and many of them thought it was just too over the top. But, many of them agree that it’s exactly to sort of thing that she would do, and not be shy to promote her bowel-gas product.

90 Day Fiance fans commented on Instagram and one of them said, “Who ever buys this need[s] a deep talk 😂nbs.”Then another fan wrote, “Society is doomed 🙄.” One fan seemed disgusted and wrote, “What in the f is wrong with this lady…….” Meanwhile, one TLC follower just posted up, “The actual f*ck🤮.”

One 90 Day Fiance fan on Twitter seemed happy about the product sold by Stephanie Matto. They posted up: “Worth it… she is incredible.”

What are your thoughts about the TV star and influencer selling her farts in a jar? Sound off in the comments below.