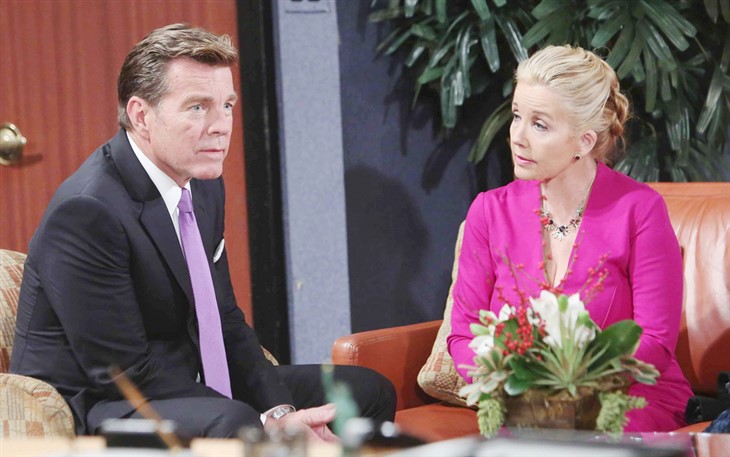 The Young and the Restless (Y&R) spoilers reveal that in Genoa City, Wisconsin Jack Abbott (Peter Bergman) told Phyllis Summers (Michelle Stafford) that he still loves her. Jack is having a lot of guilt about the situation, enough that he has a nightmare. In that dream, Jack’s love admission drives Nikki Newman (Melody Thomas Scott) to the bottle. The actor explained the upcoming storyline.

The Young And The Restless Spoilers -Phyllis Summers Compilation

Y&R spoilers reveal that Jack feels that he royally messed up by admitting his love to Phyllis. It was a statement he blurted out after having just one too many glasses of wine. Even though Phyllis does understand where it came from, she’s trying to put it out of her mind. After all, love was never the problem between her and Jack. Plus, she is in a relationship with Nick Newman (Josh Morrow). So, this isn’t exactly going to be a love triangle storyline. Nonetheless, it will cause some complications between the three of them.

Jack has a dream that centers around his guilt about the love admission to Phyllis. In the dream, Sally Spectra (Courtney Hope) appears and Nick starts raging at him for causing problems. Bergman explained to Soap Opera Digest,

“Nicholas is furious. He just rages at Jack for planting seeds of doubt in Phyllis’ mind about their relationship. Jack realizes what he said to Phyllis has affected her and Nick, and that definitely wasn’t Jack’s intention. He would never act on these feelings but Nicholas accuses Jack of betraying their friendship.”

Then, Nikki and Victor Newman (Eric Braeden) show up. What happens next makes Jack realize that this isn’t really happening and isn’t a dream. It’s actually a nightmare.

The Young And The Restless Spoilers – Driving Nikki Newman To Drink

The Young and the Restless spoilers reveal that Bergman told the magazine that Jack nearly sends Nikki back to the bottle.

“Nikki is actually contemplating drinking again. And then Victor shows up to put in his two cents, so in that sense, we can now call this dream a nightmare… He knows what he needs to do.”

When Jack wakes up, he suddenly realizes what this nightmare is all about. He also knows what needs to be done. He dials a number and asks to meet someone to talk, but it’s not Phyllis. Jack calls Nick and the two men meet. Will Jack confess to telling Phyllis that he still loved her? Or is Jack just seeking advice about his loneliness? We will have to keep watching the CBS soap to find out.