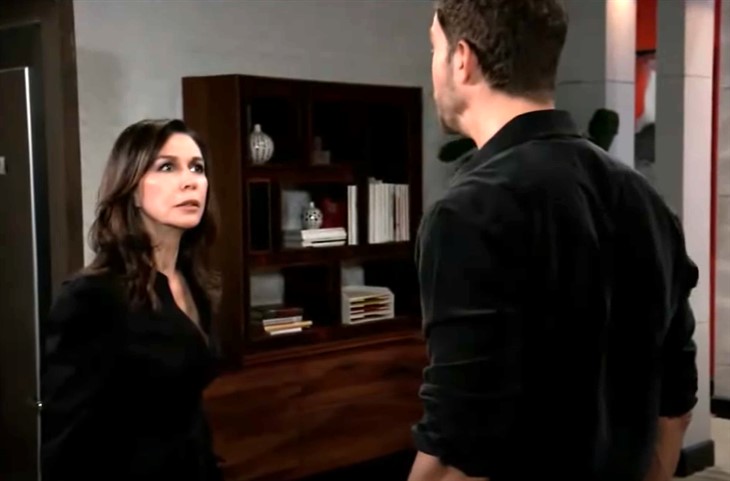 General Hospital spoilers reveal that Anna and Valentin finally make it to Nixon Falls this week after apparently taking the scenic route to get there.

If it feels like it’s been about a week in real-time since Nina (Cynthia Watros) called Valentin (James Patrick Stuart) and gave him hints that he might be in trouble, that’s because it has. He and Anna decided they needed to get to Nixon Falls ASAP but as the Tan-O burned and Peter (Wes Ramsey) caused usual Peter problems, Anna and Valentin were nowhere to be found.

The two men who have loved Nina Reeves the most over the last few years should have known she was just a little wacky but nonetheless, just like Jax, Valentin Cassadine is shocked that Nina kept Peter’s whereabouts a secret and did not inform Maxie (Kirsten Storms) right away.

Anna is also shocked, but since she never loved Nina, she lays into her with a ferocity only worthy of Anna Devane. If Nina thought she heard it from Sonny Corinthos (Maurice Benard) for her basket of lies, she is not ready for Anna, but she still has to take it.

After Anna reads Nina for filth for all she has done, she knows she needs to find Peter herself. Anna is not at all shocked that he’s still alive, despite it being amazing that two medical professionals like Hamilton Finn (Michael Easton) and Elizabeth Webber Baldwin (Rebecca Herbst) would think the man was dead. No matter, Anna feels she must take care of it herself.

Anna goes into this like the WSB agent she is and knows she has to catch a fugitive. Since she no longer thinks of this horrific man (and character) as her son, she is easily able to focus on the task at hand. Catch and take out Peter August in any way she possibly can. Yes, he is her nephew, but there’s no love lost between her and Alex, so the nephew part doesn’t matter at this point.

Will she do it? Will Anna finally be the one to put us out of our misery and take care of Peter August for good. We can only hope and dream. Stay tuned to General Hospital weekdays to see if she does.

Days Of Our Lives Spoilers: Will And Sonny Return Home To help With Marlena!