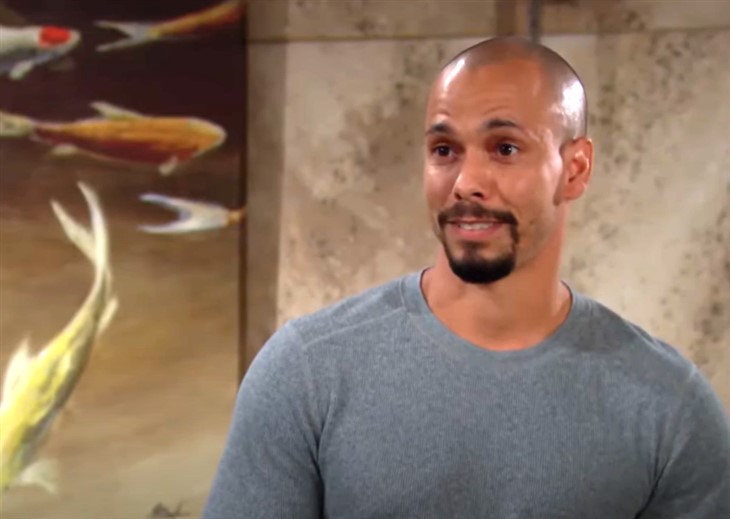 The Young and the Restless spoilers document that Devon Hamilton (Bryton James) is officially Dominic Newman Abbott Chancellor’s (no baby actor known to be cast for this role) godfather. But Abby Newman Abbott Chancellor (Melissa Ordway) wants him to play a bigger role in her genetic son’s life because he is also Dominic’s biological father.

Along with the above, Chance Chancellor’s (as last played by Donny Boaz) continued absence keeps a hole in her life open. Fans strongly feel that this is a widening gap in the plot as well.

One intriguing element of current developments involves Devon’s deepening relationship with Amanda Sinclair (Mishael Morgan). Her agreement to move into the penthouse implies that Demanda is heading toward engagement, marriage, and children. But those steps are far from certain.

Amanda supports Devon’s presence in Dominic’s life. She is happy for the man that could become the father of her children.

However, it is fair to wonder if the friendship Abby and Devon share will become more than that if Chance remains on assignment indefinitely? It feels as though this part of the storyline has been developed on the fly, rather than with deep foresight. But possibly that is not the case.

It could be that Abby’s future is with Devon and that was the point of writing Chance out. Alternatively, Abby and Devon’s bond might never become romantic but Amanda will merely suspect that is true.

Devon and Hilary Hamilton (Morgan) were set to have their first child. Then a life-altering car accident happened. Their expectant baby was lost as a result of the impact on that terrible day.

Hilary had a handful of days left on the earth. Morgan’s departure from the cast included the earned privilege of having her character offer extended goodbyes to the people who were important in her life.

Now, three years after that tragedy, Devon held Dominic in his arms. The bond with him was indescribable and evoked memories of Hevon’s miscarried child. But it also may have sparked Devon’s desire to have children with Amanda.

The Young And The Restless Spoilers – Looking Forward With Positivity

The coming storyline could involve a mix of drama and sunny skies. Sure, Amanda will notice if Devon and Abby appear to be moving beyond friendship, which may or may not be an accurate perception.

Devon could find that the time he spends with Dominic helps to shape his future with Amanda.

Hevon was unique, but Hilary does not want him to stop living as she looks down from heaven. No, she is surely smiling in knowing that her identical twin sister, who she never met on this earth, telegraphs as Devon’s next wife and the mother of his next child or children.