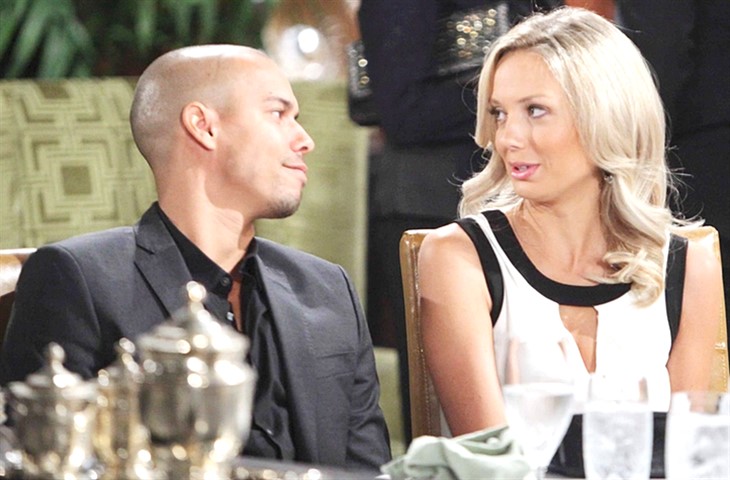 The Young and the Restless (Y&R) spoilers and updates tease Devon Hamilton (Bryton James) has everything that he could want. Devon is a highly respected member of Genoa City society. He is going to become the mentor to Moses Winters (Jacob Aaron Gaines) in their family business. He carries the family traditions that Neil Winters (Kristoff St. John) taught him. He has found love with Amanda Sinclair (Mishael Morgan). Devon wants to help the people that he cares about to get what they want. Abby Newman (Melissa Ordway) needed help. She wanted to have a baby. Devon decided that he would step up and help Abby get to realize her dream of becoming a mother.

The Young and the Restless spoilers show Devon agreed to help Abby. Devon, Abby, and Mariah thought that the experience of bringing Abby’s baby into the world would be a joyous one but Mariah was kidnapped by Dr. Ben Rayburn AKA Stitch (Sean Carrigan). Devon and Abby were able to find Mariah and help her to deliver Abby’s son Dominic Phillip Newman-Abbott-Chancellor (no actor’s name known for this important role). Devon thought that he could step back and let Chance be a father to Dominic. However, Devon has started to feel that he wants to have a more important place in Dominic’s life.

Devon did not know if he would find love again after he lost Hilary Curtis Hamilton (Mishael Morgan). He was surprised when he found love with Amanda because she is Hilary’s twin sister. Devon and Amanda have been dating for a while. Devon wants to take his relationship with Amanda to the next level. He has asked Amanda to move in with him. Amanda has agreed to move in with Devon.

Y&R spoilers show Amanda has been having trouble with her family that Devon wants to help her with. Amanda is concerned about her mother Naya Benedict (Ptosha Storey) because she having a medical crisis. Amanda wants to start a law firm and have her sister Imani Benedict (Leigh-Ann Rose) to join her in the firm. Amanda and her family are going to be facing the court case against her grandfather Sutton Ames (Jack Landron). Devon wants to support Amanda through the challenges she facing with her family.

The Young and the Restless Devon wants to the best for the ones that he cares for. Devon wants Abby to be happy and get the family that she dreams of. Abby is getting more concerned that Chance may not come back to her and Dominic. Abby may want to have Devon step in and take over as Dominic’s father. Will Devon get to be the one who gets to be Dominic’s father instead of Chance? Devon and Hilary wanted to be parents on The Young and the Restless but she lost their child. Devon has wanted to be father ever since he lost both Hilary and their child.

Devon wants Amanda to be able to put her family problems in the past. Can Devon help Amanda deal with her family’s issues? Devon loves Amanda and wants a future with her. Will Devon and Amanda have a long future together? Be sure to catch up on everything happening with Y&R right now. Come back here often for The Young and the Restless spoilers, news, and updates.

Are 90 Day Fiancé Stars Juliana And Michael Getting Divorced?