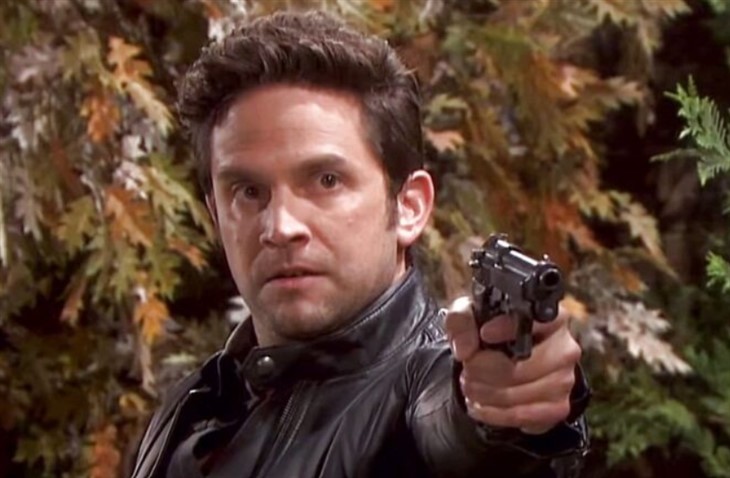 Days of Our Lives (DOOL) spoilers tease that Gabi Hernandez (Camilla Banus) has done some terrible things, but most of the things she has done were fueled by emotion. She not a hardened criminal who could kill a stranger for money. Gabi’s worst crime to date, implanting a bomb in Julie Williams’ (Susan Seathford Hayes) pacemaker which she could detonate right from her phone might seem pretty cold and devious, but Gaby wouldn’t have even entertained the idea of blackmailing Lani Price (Sal Stowers) if she didn’t’ believe that Lani purposely murdered her husband, Stefan O DiMera (Brandon Barash). So it will be interesting to see how she feels about the fact that Jake DiMera (also Brandon Barash) didn’t just work for the mob, he was actually a hitman!

Days Of Our Lives – Will Gabi Hernandez Have An Issue With Jake DiMera’s Former Life As A Hitman ?

Gabi will likely be more upset that Jake kept it a secret from her than the secret herself. A secret like that could lead Jake straight to prison and if Gabi had known that, then no one could try to use that information against her. Gabi has no idea if there is evidence out there that proves Jake killed people for money. And it certainly help to explain why Jake and Ben Weston (Robert Scott Wilson) became best friends became friends so easily and why Jake seemingly no issue that Ben murdered several women in cold blood. But Gabi isn’t always predictable, so think and this paragraph as the best scenario for Jake.

DOOL Spoilers – It’s Impossible To Know How Gabi Hernandez Will React To Anything Depending On The Day And Her Mood!

Gabi could even change her mind the more she things about it. Someone might decide to cause trouble by hinting that Jake might have been hired to kill Gabi herself. And as much as she wouldn’t want to believe that, could she ever really be sure that someone didn’t pay Jake to kill her at a specific date and time. Jake might try to say that Gabi has killed, but she will shut him down. Jake killed people who had done nothing to him and even taken money for it. Anything she or even Ben had done were not as bad as that. There’s another possibility as well.

Gabi could also find herself turned on by Jake’s bad boy past. As she hears more and more details, she might not be able to help herself. The role play might improve their time in bedroom. It’s really hard to know how Gabi will feel and it’s possible that her feelings may change on a daily basis. Then it’s up to Jake if he wants to talk about that life or if he really is trying to put all that behind him.

Will Gabi find out that Jake killed people for money? Can she justify her own past while still judging Jake? Could Jake actually have been hired to kill Gabi? Literally anything can happen in Salem, so stay tuned to Days of Our Lives airing weekdays on NBC. And don’t forget to check back right here regularly for all your Days of Our Lives news, information and spoilers!