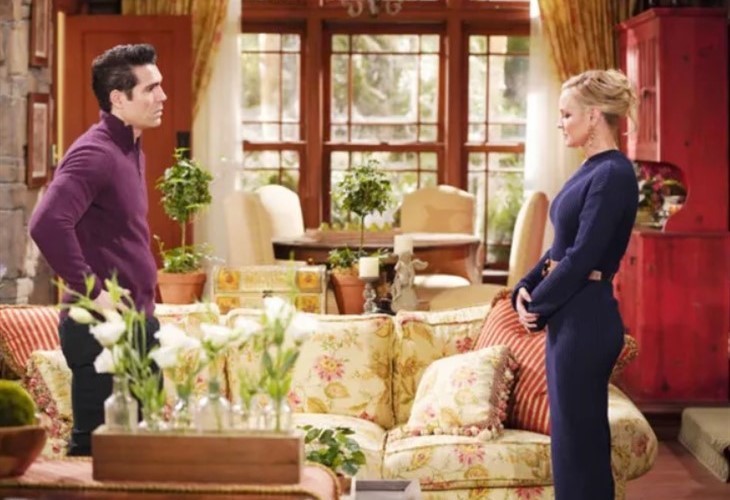 The Young and the Restless (Y&R) spoilers for Monday, September 20, 2021, reveal in Genoa City, Wisconsin Sharon and Rey once again at odds and it’s once again over Adam Newman. Will Sharon ever be able to stay away?

The Young And The Restless Spoilers – Is There Any Hope For Sharon And Rey?

Since the day Sharon (Sharon Case) and Rey Rosales (Jordi Vilasuso) wed less than a year ago, all they’ve ever argued about is Adam (Mark Grossman). Rey has moved out on Sharon several times at this point and she’s agreed to stop seeing Adam over and over. But Sharon always ends up seeing Adam anyway and having to confess to Rey that she saw Adam. Cause Adam always needs help and always turns to Sharon. Even a kid like Connor (Judah Mackey) can see it.

Rey is once again frustrated and furious while Sharon once again insists there is nothing between her and Adam. And maybe she is even right. And maybe Rey should stop telling Sharon what to do. Or maybe he should start worrying about her relationship with Nick Newman (Joshua Morrow) instead. That was quite a moment Sharon and Nick shared last week.

Speaking of Adam, Chelsea (Melissa Claire Egan) and Chloe (Elizabeth Hendrickson)decide his business is their business while they video chat. They just don’t trust that woman Sally Spectra (Courtney Hope) although Chloe is the one who hired her. But Chelsea doesn’t like her and that’s enough for Chloe.

They think she will hurt Adam in the end, as if they both haven’t hurt Adam. Will Chelsea soon start running a con from afar if she isn’t running one already with her allegedly injured mother? Does anyone really believe that excuse to get out of the mental hospital?

Now that Amanda Sinclair (Mishael Morgan) is back, Devon Hamilton (Bryton James) is ready to get on with their lives together. But they need to hash a few things out. When they do, they come to a momentous decision in their lives. What will that decision be? Does it have to do with Dominic? Stay tuned to the Young and the Restless weekdays to see how these stories play out.