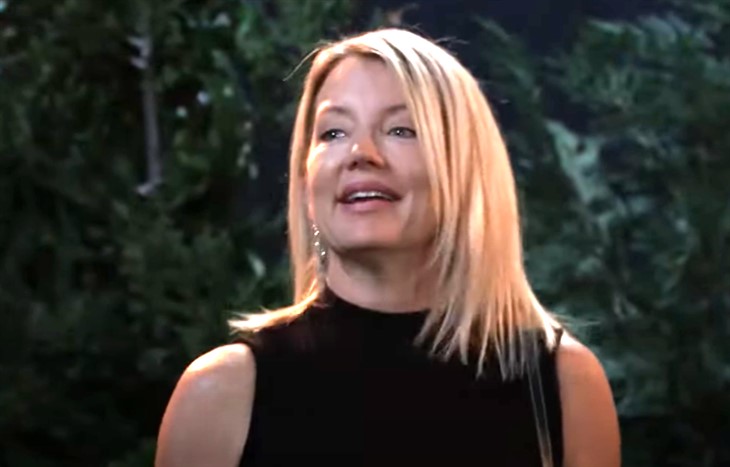 General Hospital (GH) spoilers and update tease Nina Reeves (Cynthia Watros) does not want to lose the ones that she loves. Nina has been living in Nixon Falls, Pennsylvania. She had a happy life in Nixon Falls because she met and fell in love with Mike who was really Sonny Corinthos (Maurice Benard) with amnesia. Nina made friends with Phyllis Caulfield (Joyce Guy) and her husband Lenny Caulfield (Rif Hutton).

Nina and Sonny helped to support Phyllis when Lenny died. Nina thought that she would be able to stay in Nixon Falls with Sonny and Phyllis permanently. However, Nina’s world went up in flames when Peter August (Wes Ramsey) burned down The Tan-O which helped Sonny to remember his past.

Nina has real feelings for Sonny. She loved him when he could not remember his past. Nina felt badly about keeping the fact that Sonny was alive from his family. Nina thought to tell Sonny’s family that he was alive but decided to keep the fact that he was alive a secret. Nina was upset in the beginning with Carly Corinthos (Laura Wright). Carly was trying to keep Nina from being a part of her grandson Wiley Quartermaine-Corinthos (Theodore and Eric Olson) life. Nina started to believe that Sonny was happier being Mike.

Sonny did not have to live the mafia lifestyle that has kept him in danger for most of his life. Nina wanted Sonny to be free from his dangerous lifestyle. Sonny knows who he is and is angry that Nina kept him away from Carly, his family, and his business. Nina regrets not telling Sonny about his past. However, Nina still loves Sonny and wants to be with him. Sonny wants to return to his Carly and his family. Sonny may find that he has changed during his time away. Nina may be able to get Sonny to give her another chance if Sonny finds that he still has feelings for Nina.

Nina does not know if she will be able to stay a part of Wiley’s life. Nina kept Sonny away from his family which included his son Michael Corinthos (Chad Duell). Michael is Wiley’s father. Nina has made mistakes with Wiley before. She told Wiley that her daughter Nelle Benson (Chloe Lanier) was Wiley’s mother and not his adopted mother Willow Tait (Katelyn MacMullen). Michael and Willow did not want Nina to see Wiley after the mistake she made with Wiley. Michael will be furious when finds out that Nina kept Sonny from his family. Michael and Sonny are close. Michael has missed Sonny when he thought that he lost him. Michael will not know if he will let Nina see Wiley again. Nina will not want to lose Wiley. She will need to prove to Michael that she should be a part of Wiley’s life.

General Hospital Spoilers: Nina Fights to Keep Her Loved Ones

General Hospital Nina does not want to lose Sonny and Wiley. Nina knows that Sonny loves Carly. However, Carly has started to have romantic feelings for her longtime friend Jason Morgan (Steve Burton). Carly and Jason had just gotten married when Sonny came back into their lives. Carly may decide that she wants to be with Jason instead of Sonny. Nina would be able to win back Sonny’s love if Carly was with Jason. Can Nina find a way to be with Sonny if he loses Carly to Jason? Nina will not want to lose Wiley. She might have to find a way to convince Michael and Willow that she should stay in Wiley’s life. Can Nina convince Michael and Willow to let her be a part of Wiley’s life in the future? Be sure to catch up on everything happening with GH right now. Come back here often for General Hospital spoilers, news, and updates.