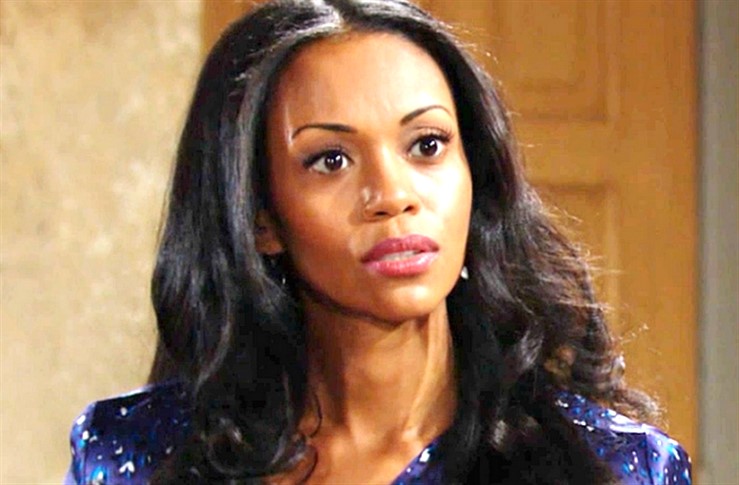 The Young and the Restless (Y&R) spoilers document that Amanda Sinclair (Mishael Morgan) is enjoying bonding time with her mother and sister. That family needs to heal because of the recent Sutton Ames (Jack Landron) reveal and his upcoming trial.

Amanda may sense some unexpected competition for Devon Hamilton’s (Bryton James) attention when she returns. For the moment, he and Abby Newman Abbott Chancellor (Melissa Ordway) are good friends. Their longtime personal connection was briefly romantic many years ago but was never revisited.

Circumstances have evolved. The permanency of the bond with Devon exists through the presence of Dominic Phillip Newman Abbott Chancellor (no baby actor’s name known for this role). While Amanda has been fully supportive of the selfless role Devon played in Chabs’ baby’s birth, a different take could be developing.

Chance Chancellor (as last played by Donny Boaz) is a ghost. He only exists in dialogue but has not been seen in the flesh since early February.

The bizarre circumstances surrounding Chance’s sudden departure from Genoa City, Wisconsin, included news that Boaz’ time with the cast was over. But that happened more than seven months ago on-screen.

The fans know that Mariah Copeland’s (Camryn Grimes) surrogacy pregnancy and Devon’s donation were part of Dominic’s slightly SORAS’d (soap opera rapid aging syndrome) arrival. That outcome did not involve Boaz return to the cast or a recast, at least through early September.

Devon admitted to Elena Dawson (Brytni Sarpy) that her instincts were right. Elena’s insecurity about her relationship with him being threatened by Amanda’s arrival in 2019 grew over time.

Amanda’s haunting appearance had a profound impact on Devon’s psyche. He eventually dealt with Elena and Nate Hastings’ (Sean Dominic) pairing and came to terms with the feelings he developed for Amanda.

Demanda is real. This couple shared their mutual feelings of love for one another and appeared to be heading toward engagement. The resolution of Sutton’s trial should signal the next point of advancement.

Amanda was leery of becoming involved with Devon. That was natural, based on the identical resemblance to her late twin, Hilary Hamilton (Morgan).

Time passed, all was shared in the light of daytime, and Demanda formed. Repairing Morgan and James seemed like a no-brainer since the first time Amanda appeared at Devon’s penthouse door.

It is reasonable to project the next flash point being Amanda’s recognition of the unique tie Abby and Devon share. As long as Chance is not in the picture, then Ordway’s character will need support. But despite Amanda’s appreciation for Devon’s biological son, she will want and need that as well.