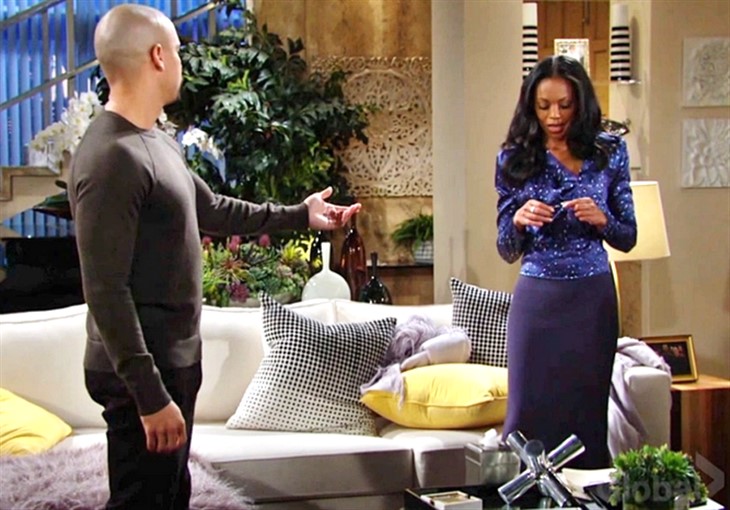 The Young and the Restless spoilers document that Devon Hamilton (Bryton James) has been profoundly affected by the birth of Abby Newman Abbott Chancellor (Melissa Ordway) and Chance Chancellor’s (as last played by Donny Boaz) baby. Amanda Sinclair’s (Mishael Morgan) identity has been forever altered by what she’s learned about her living family and deceased father.

The momentum of current events increase the odds that Devon and Amanda will not only formalize their relationship, but also have a baby of their own. Devon’s selfless act, along with Mariah Copeland’s (Camryn Grimes) surrogacy gift allowed Abby and her husband to become parents when they otherwise wouldn’t have been able to. That example will become part of Demanda’s discussion about their own future.

Hilary sought revenge against the Winters family because she believed that Neil Winters (Kristoff St. James) left her mother for dead. He didn’t, but it took awhile for the facts to be confirmed and accepted.

St. John’s character eventually saw the truth, as his sight was restored. He was crushed, but came to bless Hevon’s pairing and marriage.

News of Morgan’s departure from the cast was sobering in 2018. But the actor left the daytime door open to a return, which happened in 2019.

The fresh take isn’t that Hilary had an unknown identical twin, as that is a known soap staple. Instead, Y&R’s writing team crafted a backstory for Amanda that establishes her identity as fully distinct from Hilary. That is smart, as doing so allows Morgan’s second alter ego to be viewed distinctly.

The always great Morgan has taken the premise and is working it to the max. Amanda’s deepening relationship with Devon naturally evokes memories of Hevon, as James’ character acknowledged. However, this couple has taken its own course.

Devon is deeply affected by the birth of Chabs baby for many reasons. He will forever miss Hilary and Neil, who are both surely in heaven. Along with their unexpected departures, Devon also was not able to realize the birth of the baby Hilary was carrying when the car accident happened.

Life’s circumstances knocked Devon down. But he was able to get up with Elena Dawson’s (Brytni Sarpy) loving support. A bond with Amanda developed since that relationship point.

Demanda has and will never replace Hevon. Hilary was loved and so is Amanda.

Amanda and Devon can marry and have a child or children. Projecting that hoped-for reality plays off the impact of Amanda’s realized, biological family, Devon’s past with her sister, and the role he’s just played in bringing a child into the world.