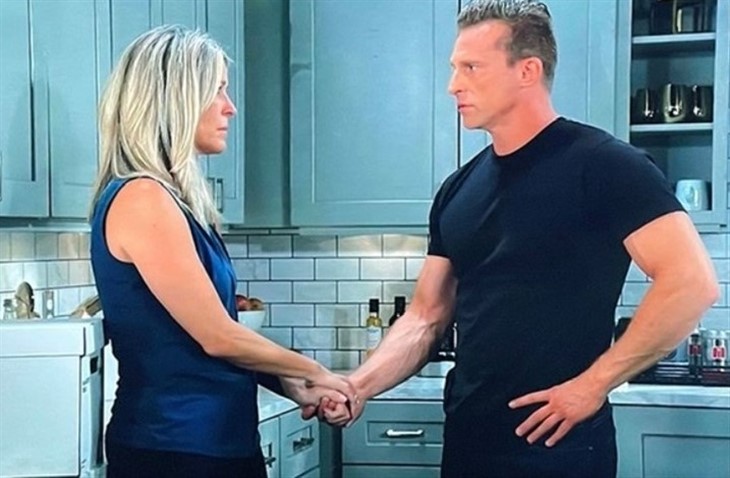 General Hospital spoilers indicate that Jason Morgan (Steve Burton) and Carly Corinthos’s wedding may indeed happen but it will not be drama-free. What will happen to upset the balance of this best-laid plan?

General Hospital’s Carly and Jason were carefree lovers years ago before he had a sexual relationship with Robin Scorpio (ex-Kimberly McCullough). However, Carly and Jason ended that relationship and remained friends for years. Jason took care of her son, Michael Corinthos (Chad Duell) for over a year. However, Carly chose to be with Sonny and Jason walked away but remained Carly’s best friend. Now the duo believes that Sonny is dead and is uniting to protect their family as well as the business. This could reignite old feelings now that they are married, but would they feel like they were betraying Sonny if they get romantically involved? Will Carly and Jason cross the line between friends and lovers? Will the two of them survive the attack that the five families have planned?

General Hospital’s Carly is turning a blind eye to the danger facing herself and Jason. Both Carly and Jason know that Cyrus Renault (Jeff Kober) is working with someone against them. Jordan Ashford (Briana Nicole Henry) already warned them of this. However, Carly and Jason are proceeding with the wedding like nothing is wrong. Jason may have both Brick (Steven A. Smith) and Damian Spinelli (Bradford Anderson) on the case but that does not mean an attack can be avoided. That also doesn’t mean that someone in the family could not be hurt by this attack.

General Hospital’s Laura Wright says that this ending is going to be big. Fans are going to get what they want and that is Sonny Corinthos (Maurice Benard). However, fans have no idea what is going to happen she says. Well, unfortunately, fans are usually pretty good at figuring out soap plots and this can only go a few ways. Sonny could show up and interrupt the wedding. Sonny could arrive after the wedding. Sonny could be mad, or Sonny could care less. Sonny could even decide he wants to stay with Nina Reeves (Cynthia Watros) and want no part of the business at all. Whatever the case may be, most fans are just happy to get rid of Mike altogether.

Regardless of the outcome of Sonny’s return, perhaps Sonny can get a handle on the mob violence and calm things with the five families. Hopefully, we will get out answers sooner instead of later and things in Port Charles and return to normal.