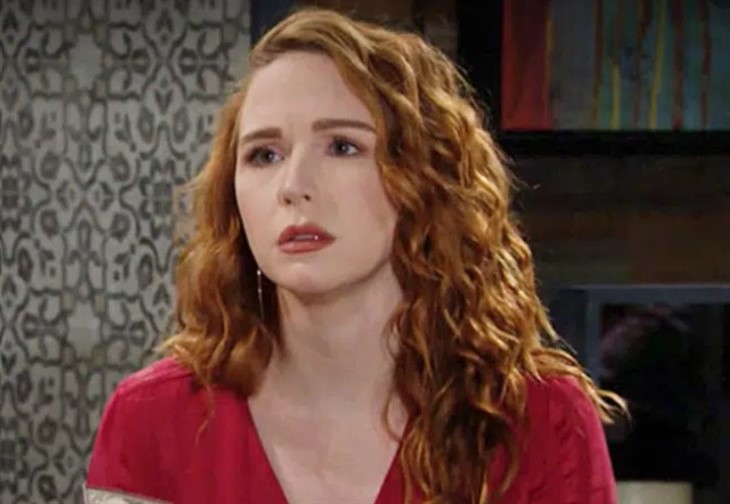 The Young and the Restless (Y&R) spoilers for Friday, September 17, 2021, reveal in Genoa City, Wisconsin Mariah coming to a decision at the most inopportune moment.

The Young And The Restless Spoilers – Will Shadam Ever End?

It’s already time for Dominic’s christening and Mariah (Camryn Grimes) and Devon (Bryton James) to take their places as his godparents, as Abby (Melissa Ordway) tries to throw them a consolation prize for not being the baby’s legal parents.

However, Mariah is not handling things well at all. She is already scared Stitch (Sean Carrigan) will return, plus she is not sure she likes how Abby is planning to raise the baby. She can’t ever get him to stop crying, plus she is ready to hire a nanny and doesn’t even have a husband around. Heck, Chance doesn’t even know the baby he has zero connection to has been born.

This all causes Mariah to let Abby know she’s changed her mind about something. Does she just want to distance herself and not be the godmother or does she want to take the baby from Abby?

Even without Mariah having a hard time letting go of the baby, Abby is a hot mess. She is all alone in that big house without a husband and her parents wonder if she is ok. Ashley Abbott (Eileen Davidson) and Victor Newman (Eric Braeden) are there for the christening and need to express their concern to their daughter about her well-being because things aren’t going well at all.

Devon is just trying to do the right thing and what he agreed to. He is honored to be the baby’s godfather although it’s hard for him not to think of Dominic as his son. Still, he agreed to just be the sperm donor, with Chance being the father, but where is Chance?

At least Devon doesn’t have much time to think about all this because Amanda (Mishael Morgan) arrives with a big surprise. Is she the surprise? Did she return from her trip early? Or does Amanda have some big news for Devon he never expected to hear? Stay tuned to the Young and the Restless weekdays to see how these stories play out.