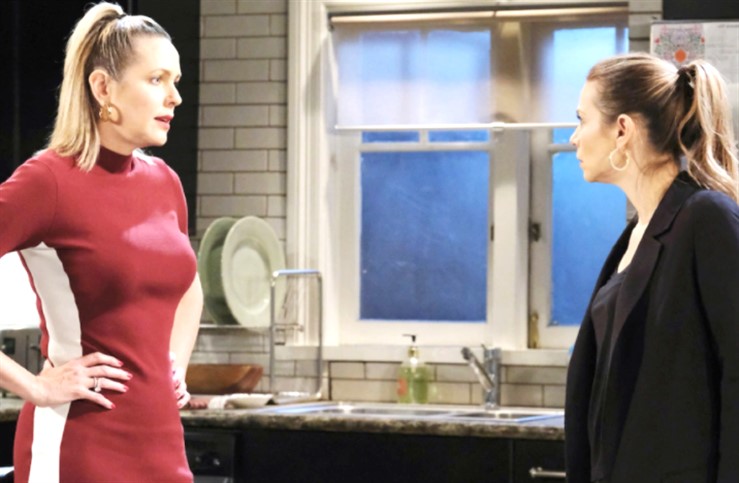 Days of Our Lives spoilers reveal that Ava Vitali (Tamara Braun) realizes that Rafe Hernandez (Galen Gering) isn’t going to admit his true feelings. So, Ava does it for him and informs Nicole Walker (Arianne Zucker). Even though Nicole has feelings for Rafe, the revelation won’t bring “Racole” together. There is a brand new obstacle that will keep them apart for a bit longer.

Days Of Our Lives Spoilers – Rafe Hernandez In Denial

DOOL spoilers reveal that Nicole admitted to Rafe that she was developing romantic feelings for him. However, Nicole and Eric Brady (Greg Vaughan) were still together. Rafe wouldn’t betray Eric and didn’t want to be the guy that broke up Nicole’s marriage. Rafe told Nicole that she was confusing her feelings and she probably just missed her husband.

In reality, Rafe had feelings for Nicole, too. For some reason, he still can’t bring himself to admit it even though it’s clear to both Ava and Eli Grant (Lamon Archey).

Ava has called Rafe out on his feelings for Nicole more than once, but he keeps denying it. Ava even decided to make things easy for him and said she was moving out. That would give Rafe a very easy exit out of the relationship with no hard feelings on either side. He didn’t take it though and asked Ava to stay. Some might say that Rafe is leading Ava on, but that’s not Rafe’s style. He genuinely is in serious denial about his feelings.

Ava is going to take matters into her own hands as she doesn’t like being the second fiddle. She is also good friends with Nicole. So, she tells Nicole that Rafe has romantic feelings for her. At one time, Nicole confessed to Ava how she felt about Rafe. So, in Ava’s mind, these two can finally be together and she won’t stand in their way. However, Ava doesn’t get the response that she expects.

Days Of Our Lives Spoilers – Nicole Walker Still Walks Away

Days of Our Lives spoilers reveal that Nicole starts a passionate romance with someone else in Salem soon. So, that indicates that Nicole and Rafe do not get together until a bit later in the year. We also know that Rafe asks Nicole to reconsider her decision to walk away from their friendship. Nicole probably says it’s not going to happen as she feels that Rafe and Ava should be together. Nicole might even tell Rafe that the only reason he has feelings for her is that she leaned on him too much.

Of course, there is always the possibility that it’s Rafe who tells Nicole that they can only be friends. One of them is going to turn down the other. This is known because Nicole gets involved with someone else to help her forget about Rafe.

The person that Nicole turns to is her former flame, EJ DiMera (Dan Feuerriegel). However, the romance probably won’t last very long. It is hinted that in the next few weeks, Nicole will become frustrated with how needy EJ has become.

Plus, Sami DiMera (Alison Sweeney) will be returning later this year. Sami will try to reclaim her husband but he might really not want her back. Plus, we know that EJ and Ava share scenes together. It is teased that EJ doesn’t have a shirt on in that scene, so a relationship forming between the two is speculated. That means Rafe and Ava officially split up at some point. We will have to keep watching the NBC soap to see how this storyline develops.